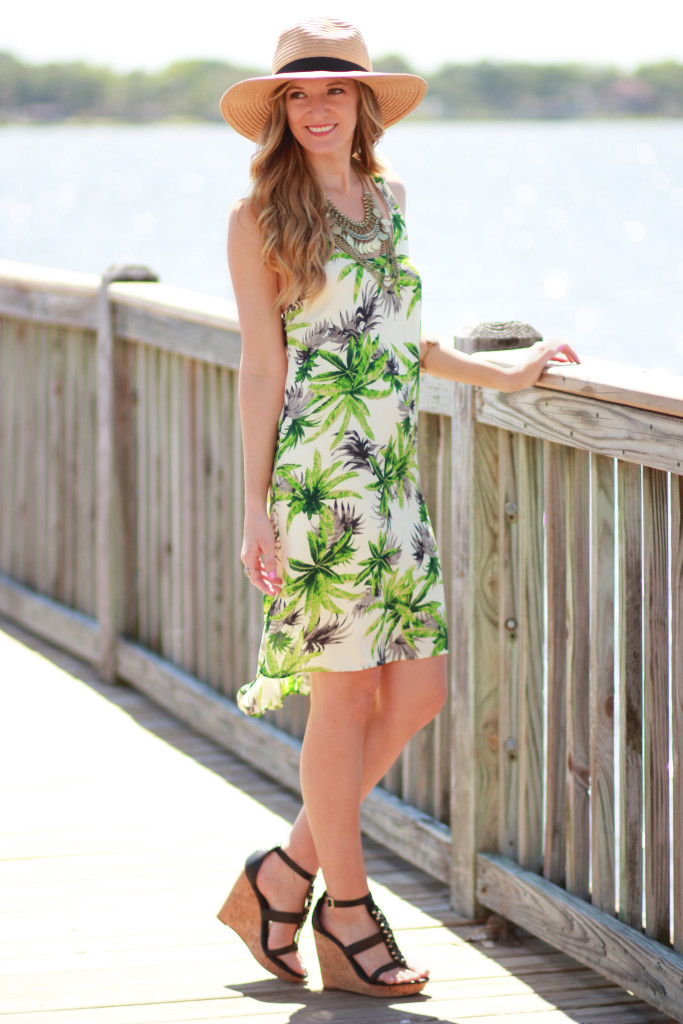 Happy almost Friday babes!! The weekend is so close I can taste it!! Speaking of weekends, how fabulous is the weekend ready palm tree print dress from Hippie Chick Boutique?! It just screams hand me a fruity drink with an umbrella stat!! It is also the most perfect vacation dress! I just love the subtle high low cut and of course the fun back! You know I can’t resist! I accessorized the dress with a funky chain and coin necklace and a simple bangle. I threw on my Sole Society hat to help with the wind, which obviously didn’t help! I swear mother nature is like, “oh hey Shannon’s taking blog pictures today, time to crank out the hurricane force wind!” I finished this look with some cute black and gold wedges I scored at TJMaxx! I hope everyone has an awesome Thursday! <3

END_OF_DOCUMENT_TOKEN_TO_BE_REPLACED 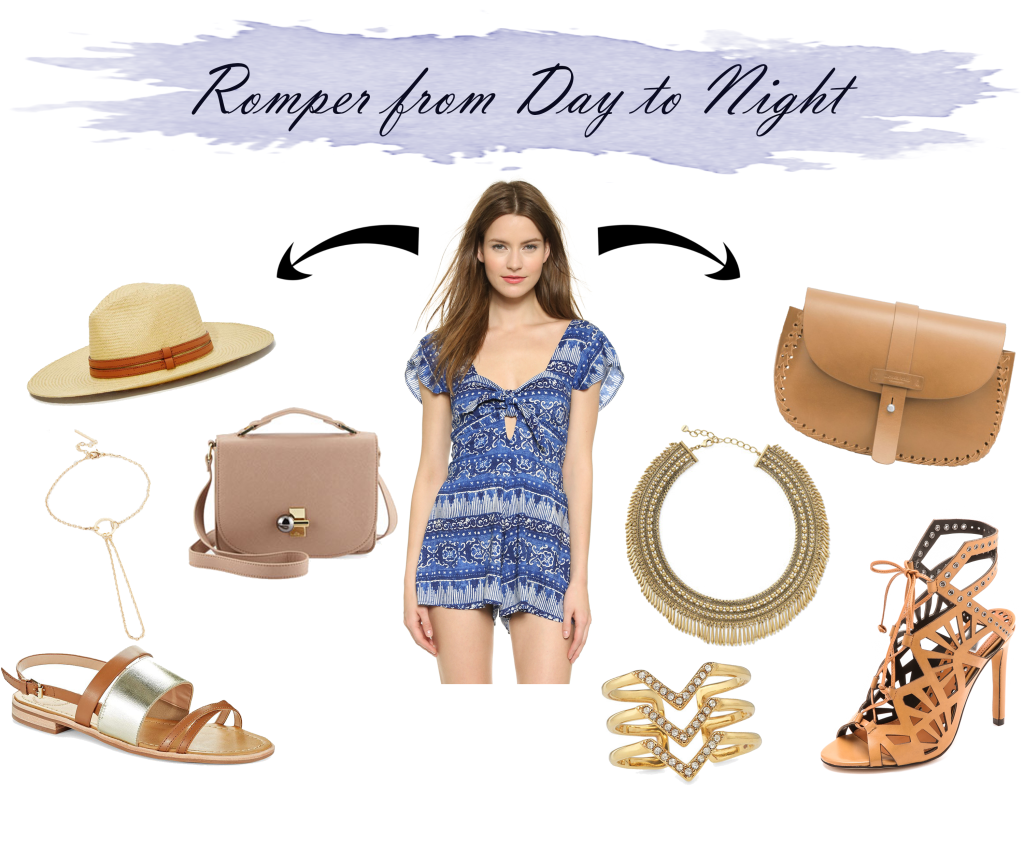 Happy Friday!!!!! We finally made it! I have a busy weekend ahead, some fun, some not so fun! We are re-landscaping the front of our house, which neither of us have any idea about landscaping so it should be interesting! Wish us luck! I was surfing the web last night and came across this House of Harlow romper, and it may be one of the cutest rompers ever so I decided to dedicate a post to it! ;) The colors and print are definitely swoon worthy and the little tie front and ruffled sleeves are just too adorable! Also the fact that it is only $43 is even better! With vacation season in full swing it is so great to have pieces that you can dress up or down, it makes packing a heck of a lot easier! Taking this romper from day to night, I accessorized both of these looks with gold and brown. For the day look I went with a nice casual strappy sandal and panama hat. I have been obsessing over hand chains lately, and I think they are too perfect for adding that something extra to a laid back vacation look! For night, I paired the romper with these lace up heels I have been drooling over for the past few months, may need to pull the trigger soon, and this insanely gorgeous MK clutch! To dress up the look, I added a fringe gold necklace and chevron ring. I hope everyone has a fabulous weekend! <3 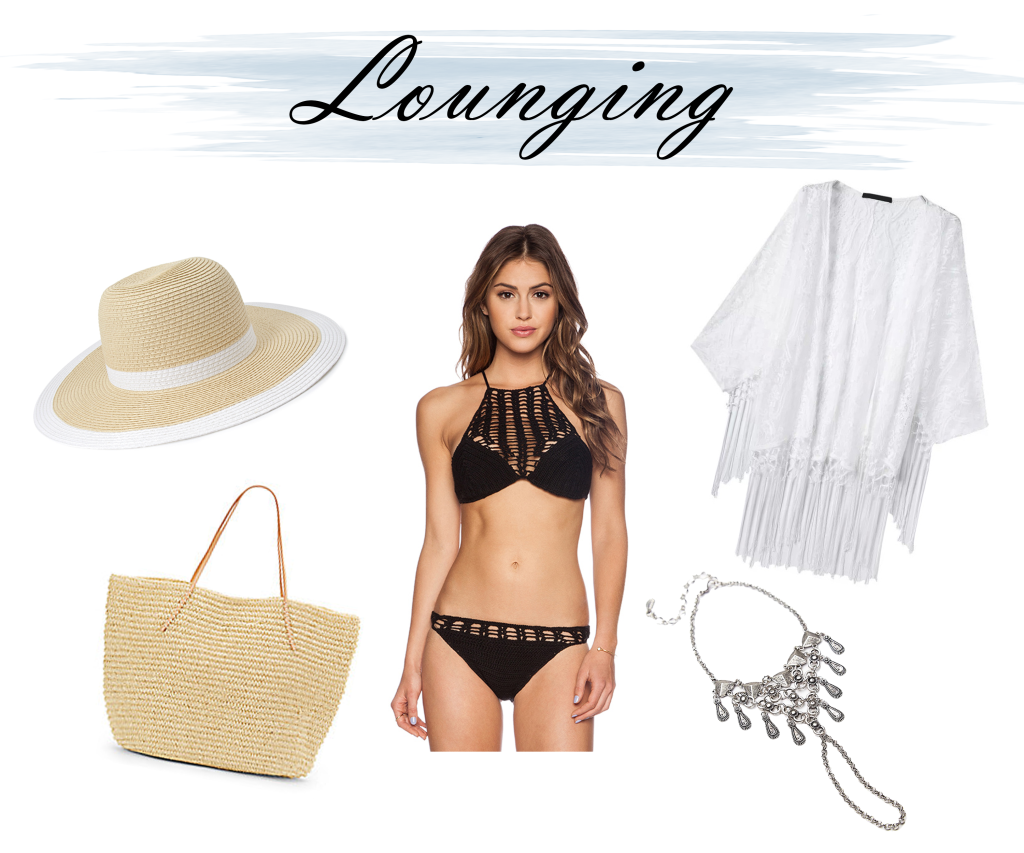 Happy hump day! It is all downhill from here ya’ll! I don’t know about you but all of this beautiful Spring weather has got me in the vacation mood! Also, we will be heading to St Augustine this weekend for a little staycation and I couldn’t be more excited! I really could use some relaxation! I have been dying for a crochet bikini (even though I am still unsure how they would do in the water) and I am swooning over this one! The neckline is just too gorgeous! Also, I cannot get enough of this bohemian anklet! How cute would it be for lounging by the pool?! My favorite part of vacation is exploring, and this floral romper is just too cute! Paired with these gladiator sandals is basically my definition of the perfect casual outfit. Lastly, it isn’t vacation with some fun nights out! This coral lace dress is too gorgeous for words! I love that it can easily be dressed down for a day look as well! Throw on these amazing lace up heels and you will be ready to dance the night away! Ok now I’m really in the mood for a cocktail! I hope everyone has a wonderful Wednesday! <3

END_OF_DOCUMENT_TOKEN_TO_BE_REPLACED
I’m backkkkkkkk!!! I’ve missed ya’ll! But let me tell you how good it felt to get away for a week, AMAZING! The hubs and I had the best time in New Orleans and we probably gained about 10lbs each! I honestly think the food in New Orleans is the best food I have ever eaten in my life! So yum! Anyways, here is quick recap of our trip, I am going to try to summarize as best as possible to not overload you! ;)
First off, out hotel, AMAZING!! We stayed at the Le Pavillion Hotel, built in 1907, right outside of the French Quarter and it seriously made me feel like a Princess! I mean, look at those chandeliers! 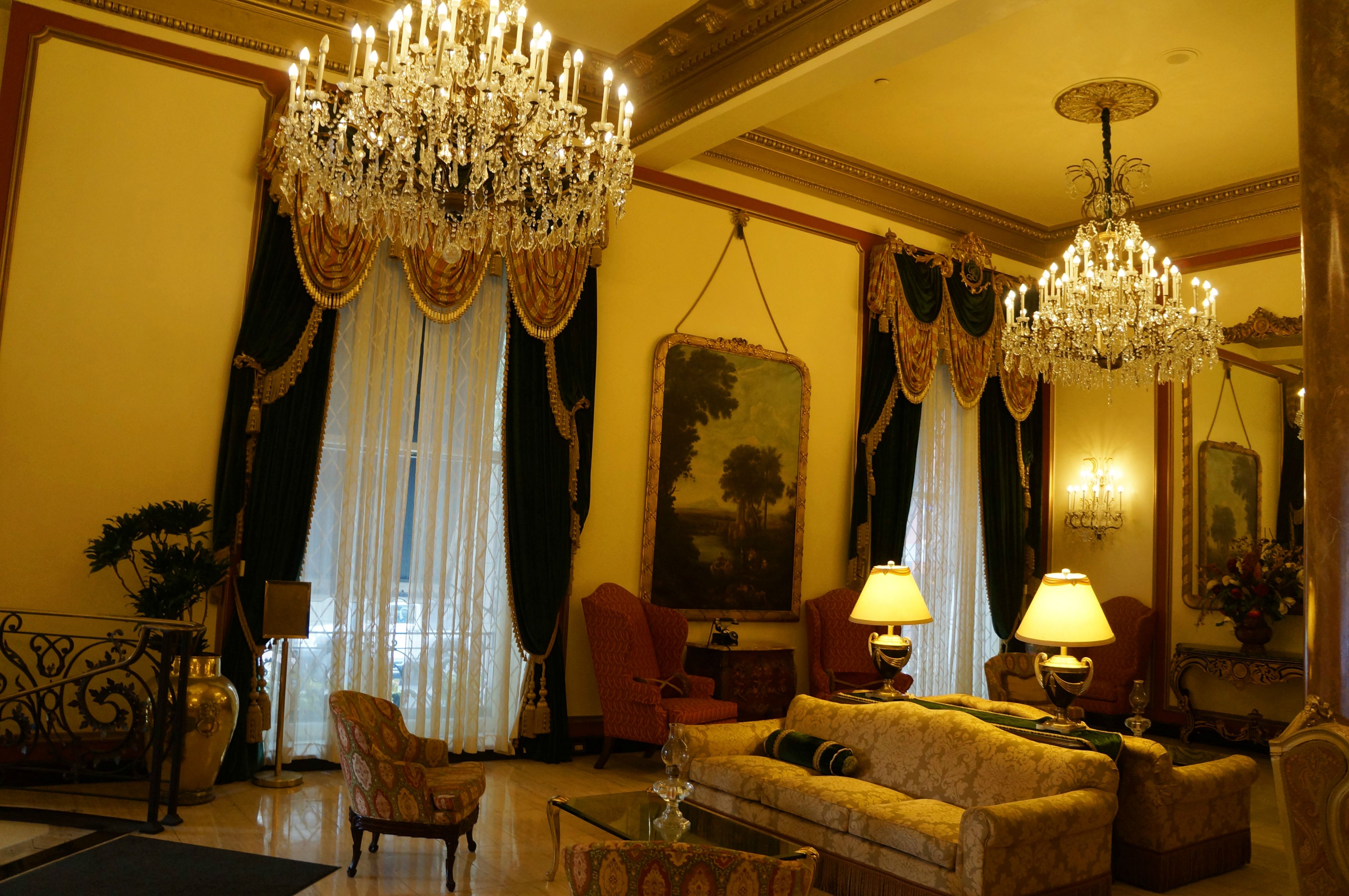 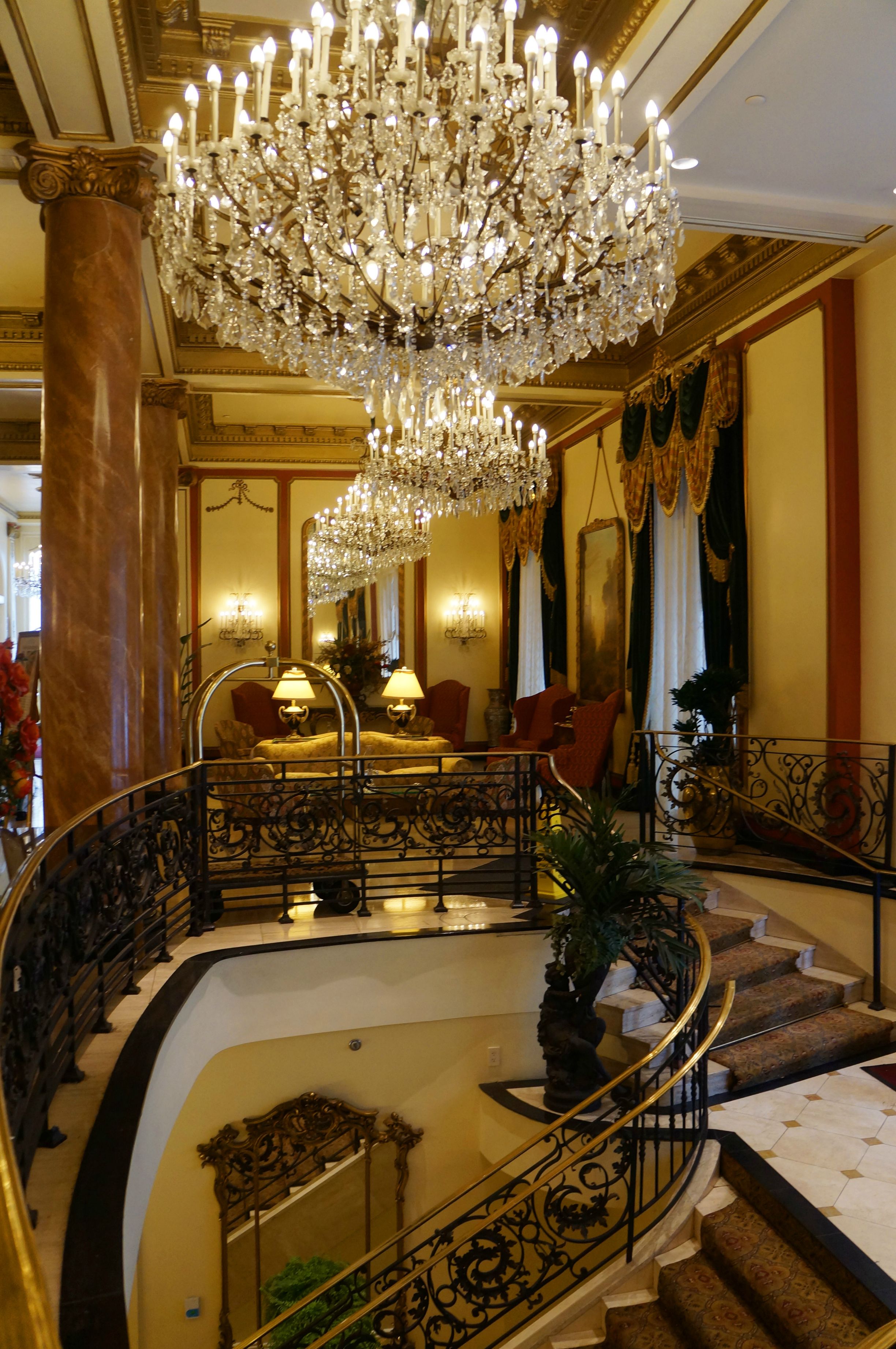 On to more gorgeouness of NOLA 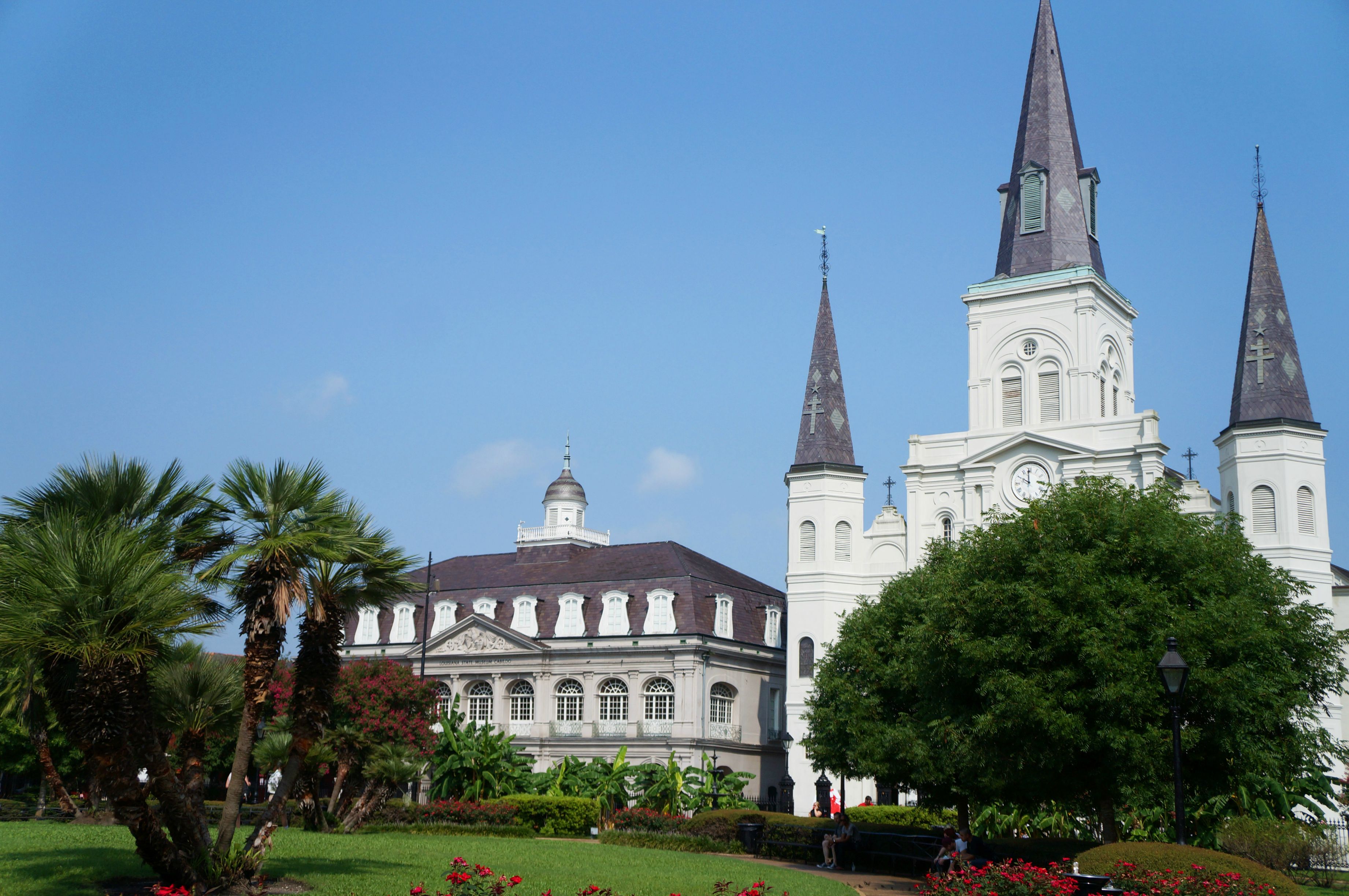 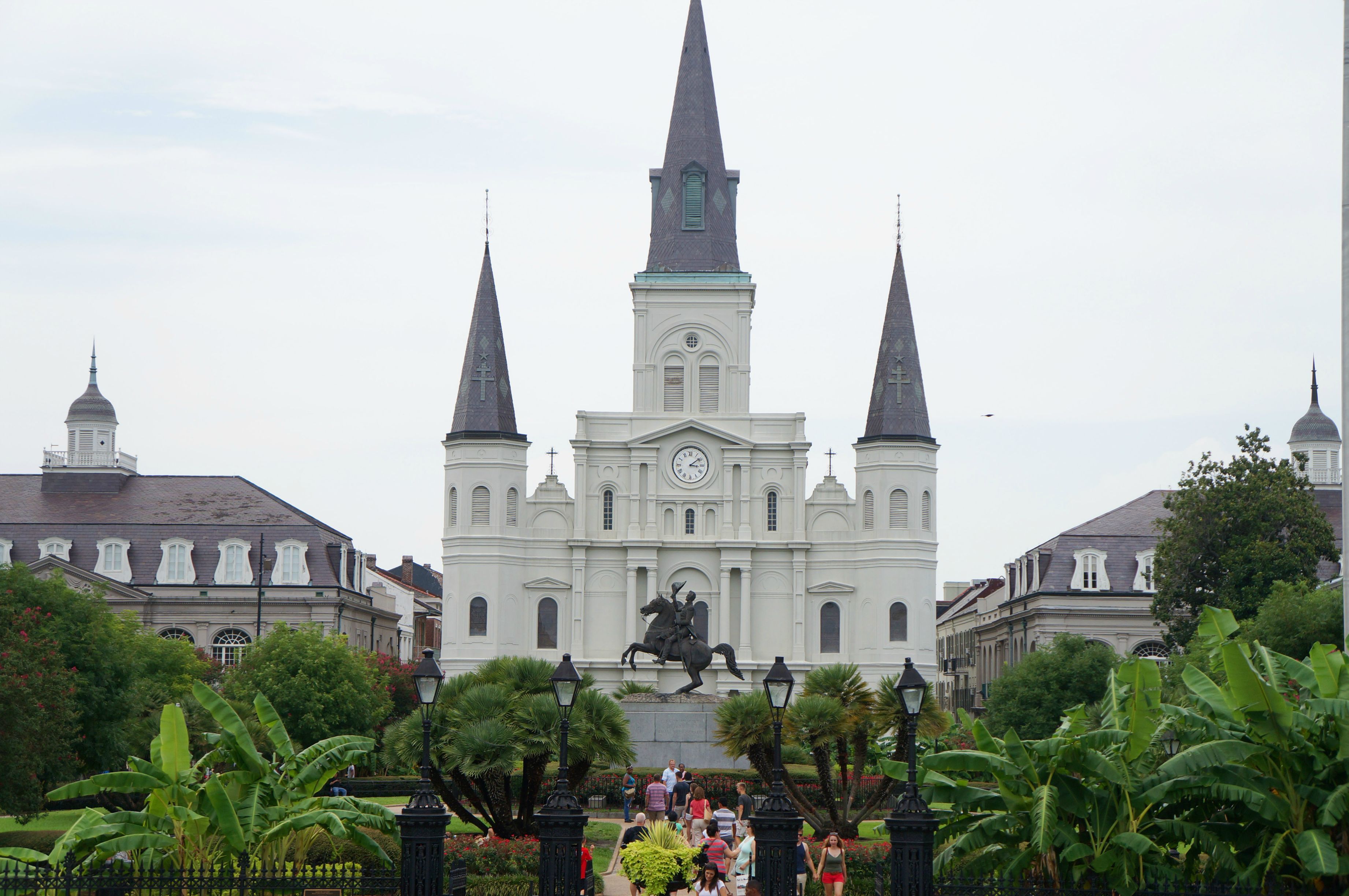 Jackson Square, with the statue of Andrew Jackson that has been up since 1856 after he helped win the Battle of New Orleans. 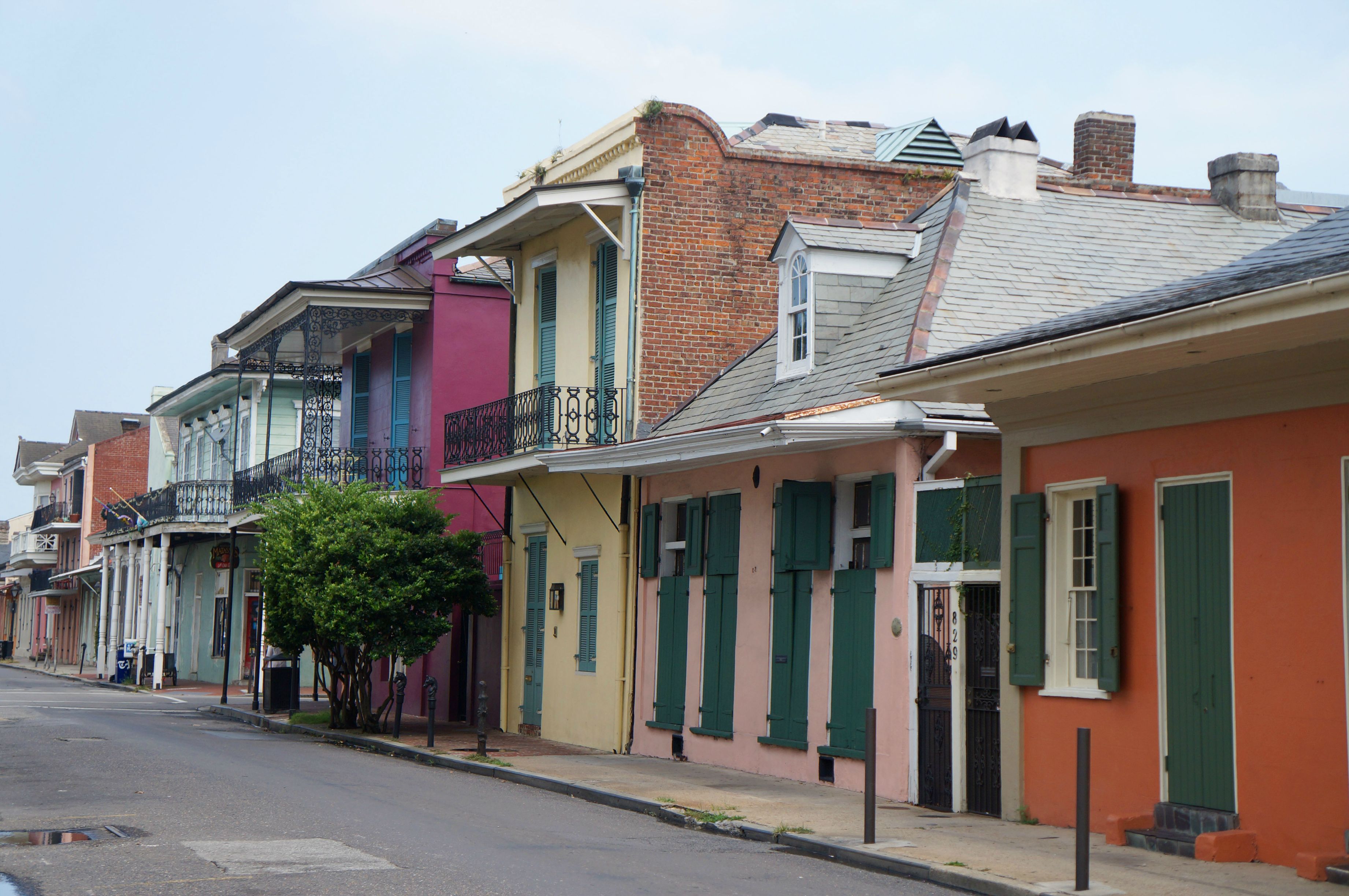 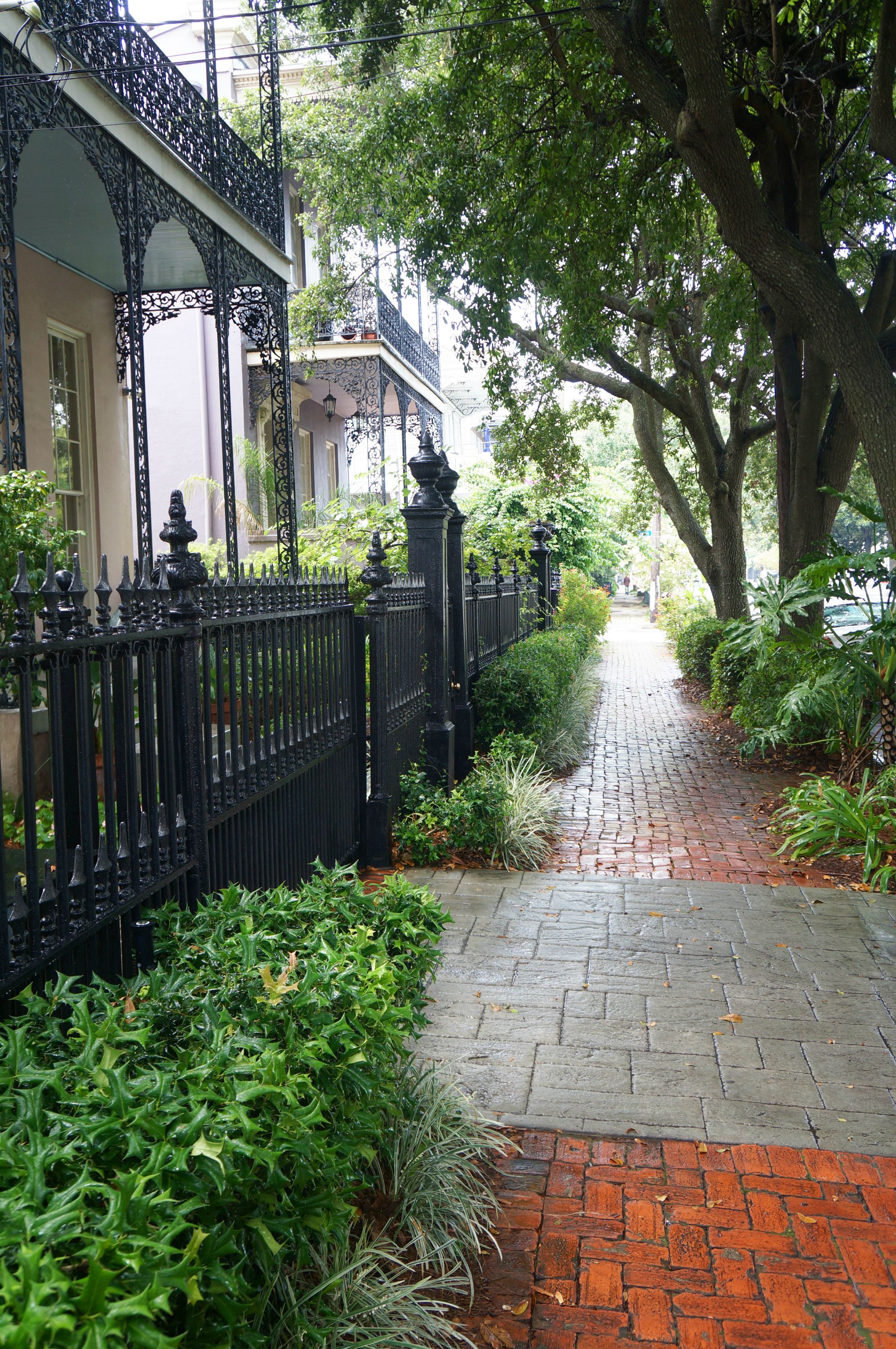 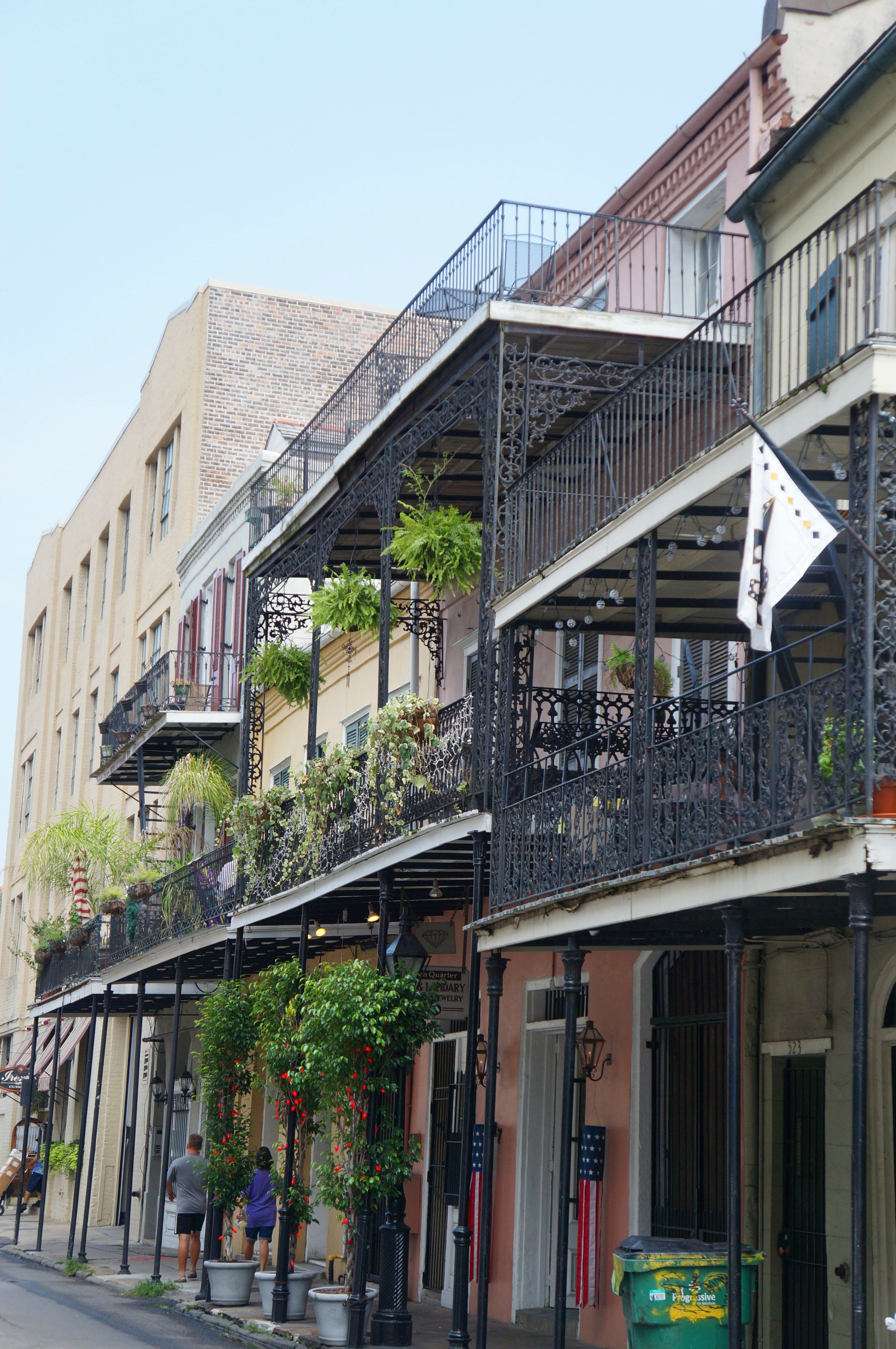 I just couldn’t get over all the beautiful architecture with the wrought iron. Which learning on one of our tours, the architecture is actually Spanish architecture, even though it’s in the French Quarter… 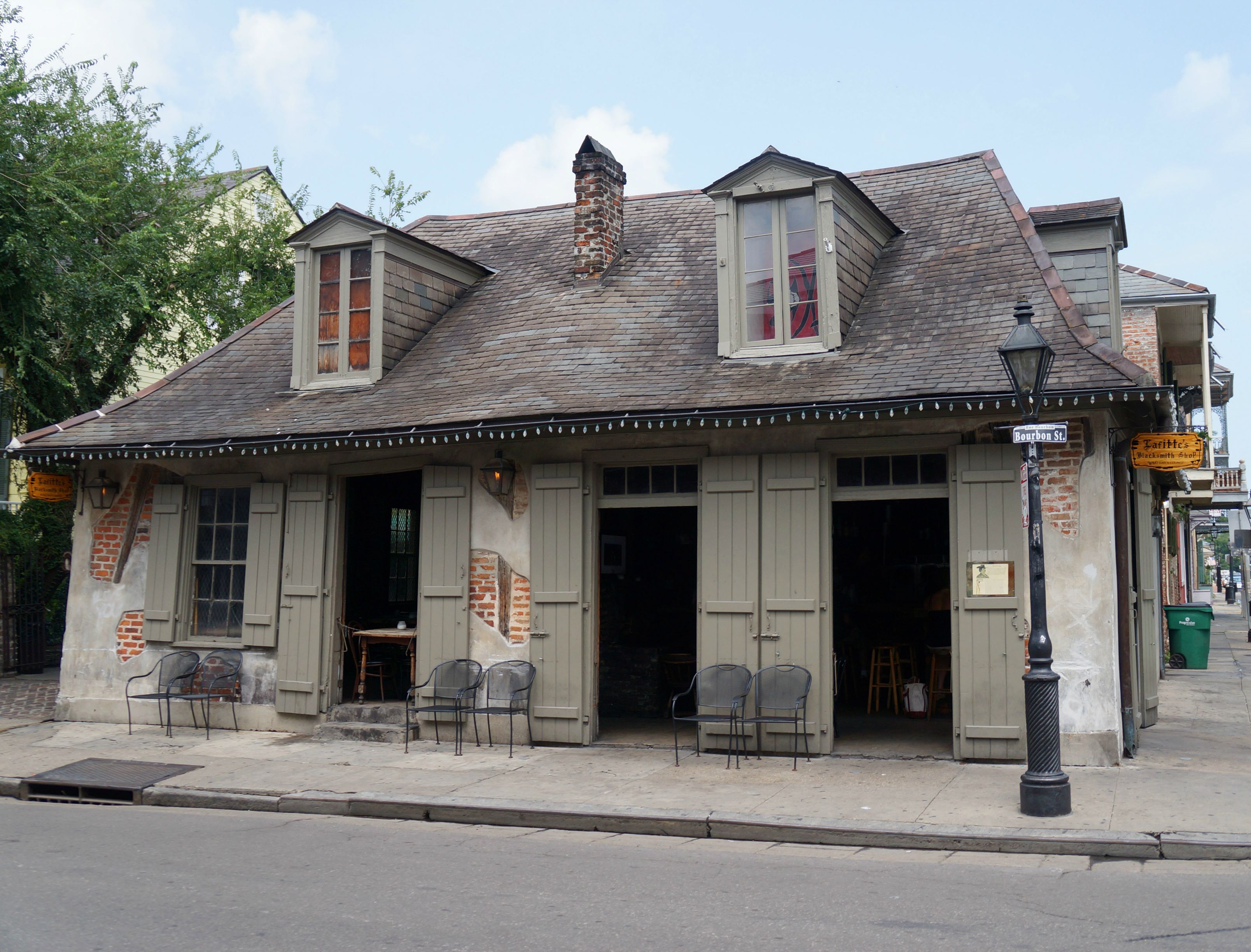 The oldest bar in America, so they claim ;) It use to be an old blacksmith shop. 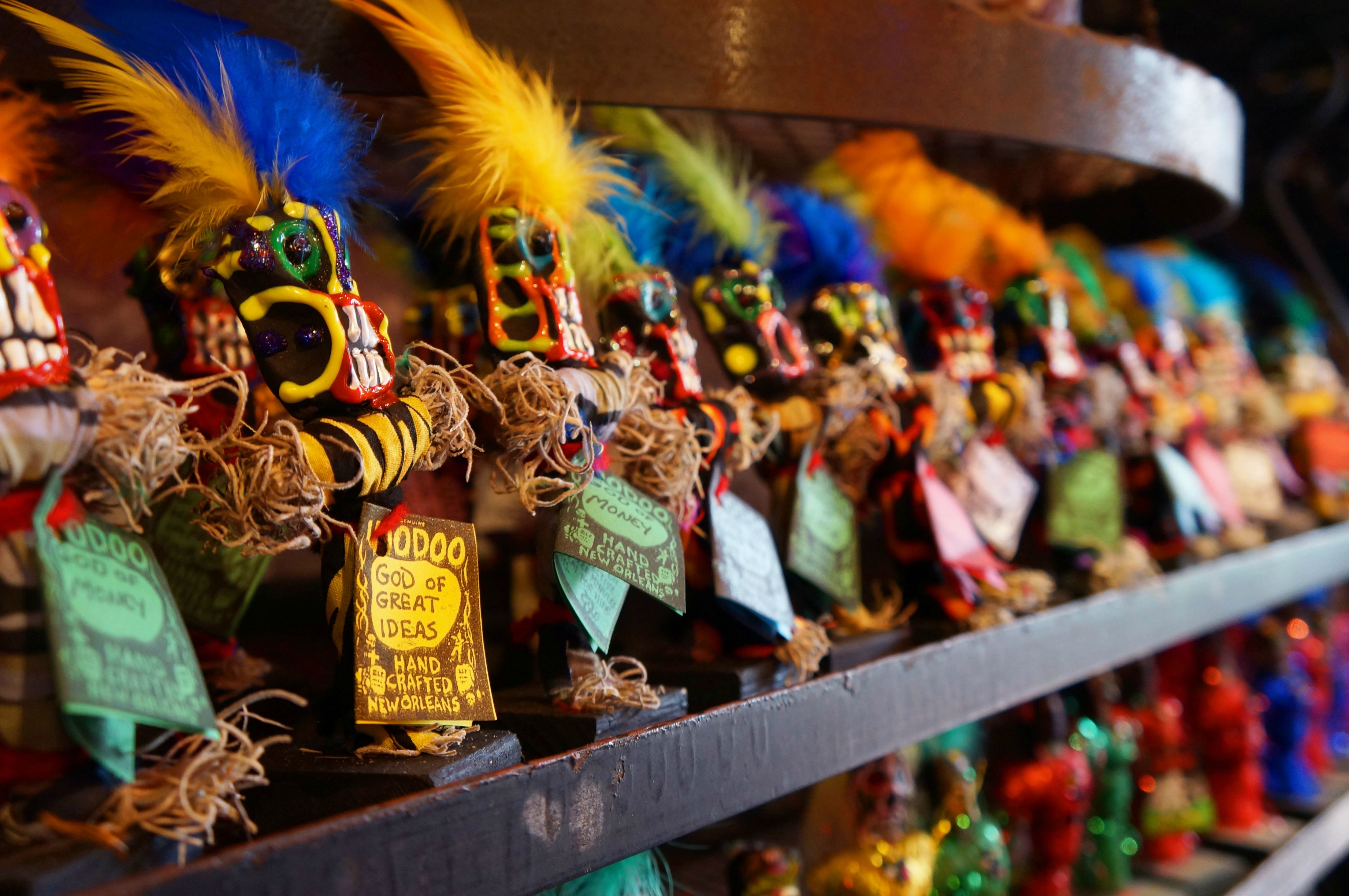 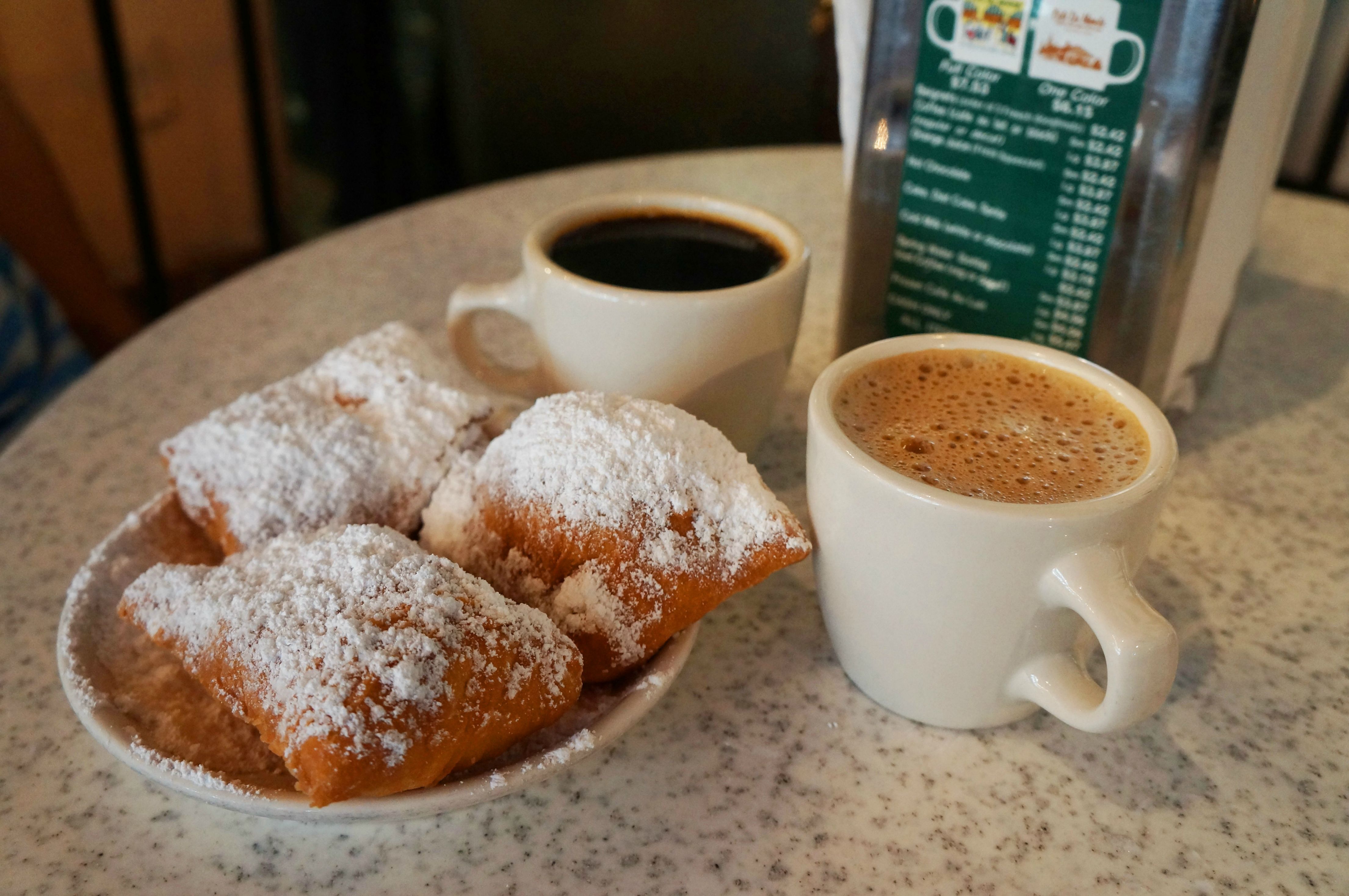 You can’t go to NOLA with out going the Cafe Du Monde! The beignets were out of this world and of course I had to bring some coffee home! So delish! 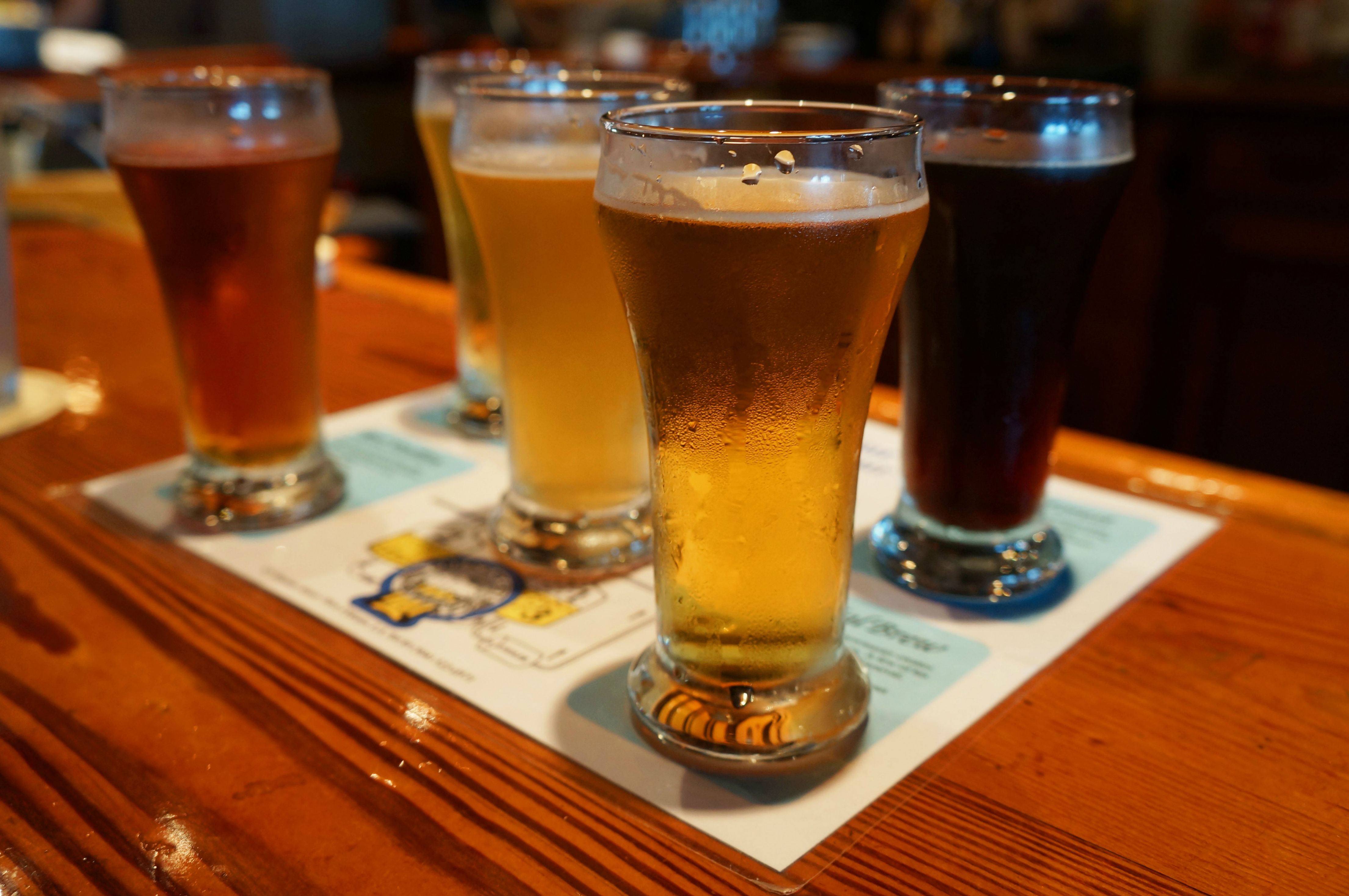 Beer tasting at Crescent City Brewery. All of their beers are brewed in house and are amazing! 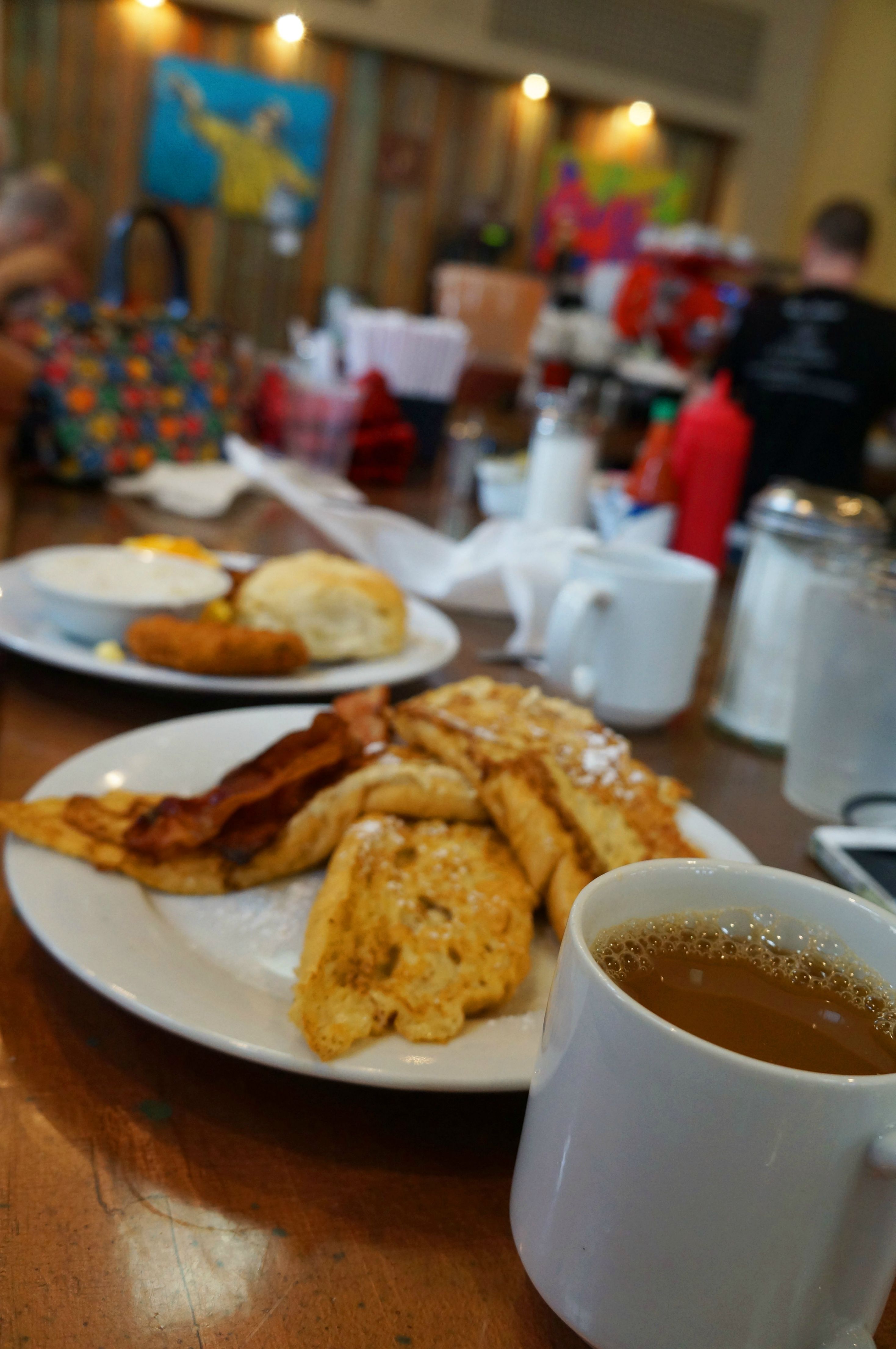 My second favorite breakfast on the trip, I didn’t get a picture of my first, I ate it too fast :( , at The Ruby Slipper. The french toast was da bomb! 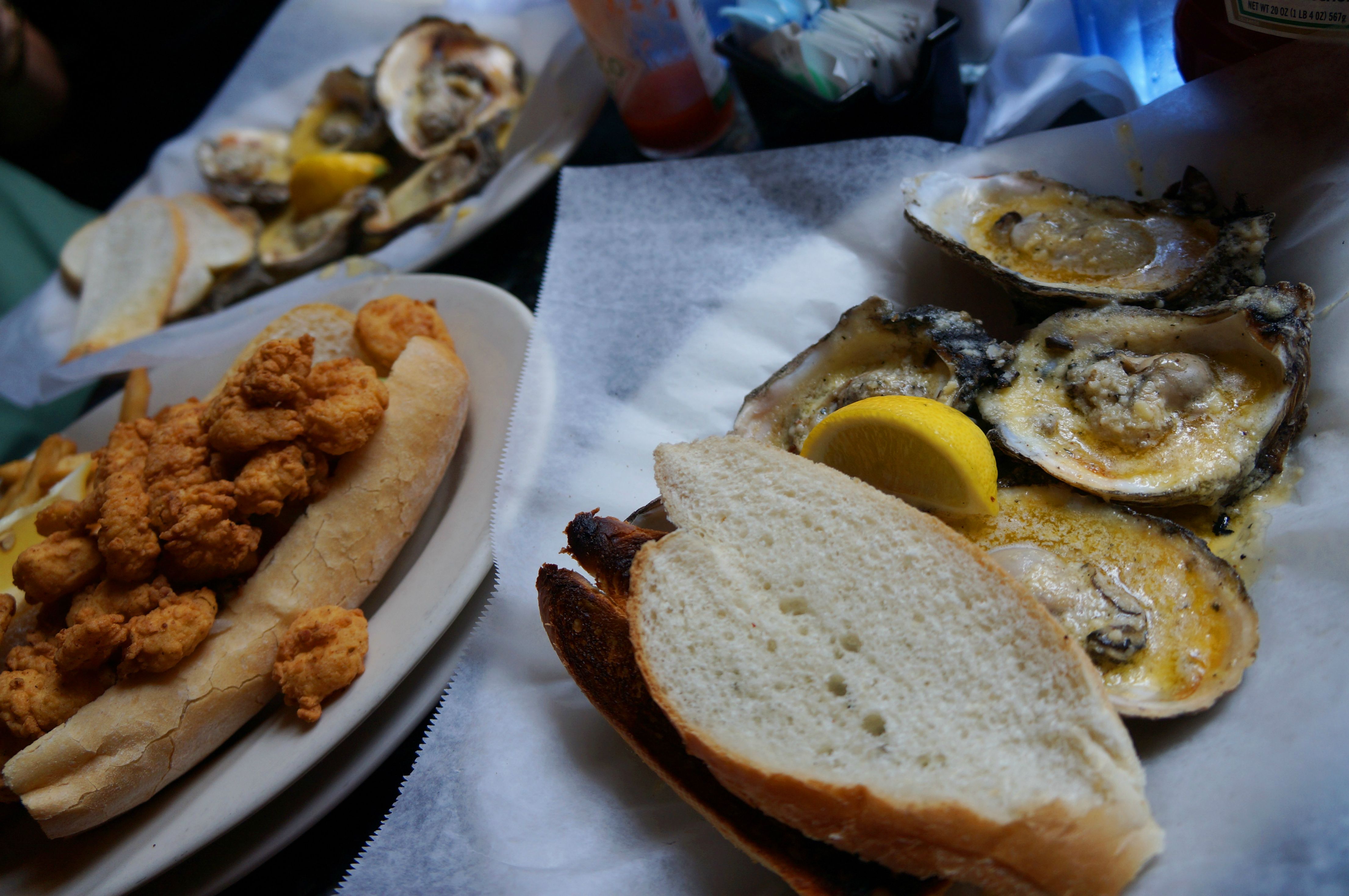 Some of the best baked oysters I have ever had at the The Royal House and another thing you can’t go to NOLA without getting, a po boy! ;p
We toured St Louis # 1 Cemetery, which is the oldest of the cemeteries, opening in 1789. Some famous people that are buried here are, Homer Plessy (from Plessy v Ferguson), Marie Laveau (the famous voodoo priestess), also Nicholas Cage bought himself a pyramid shaped tomb for his future resting place. 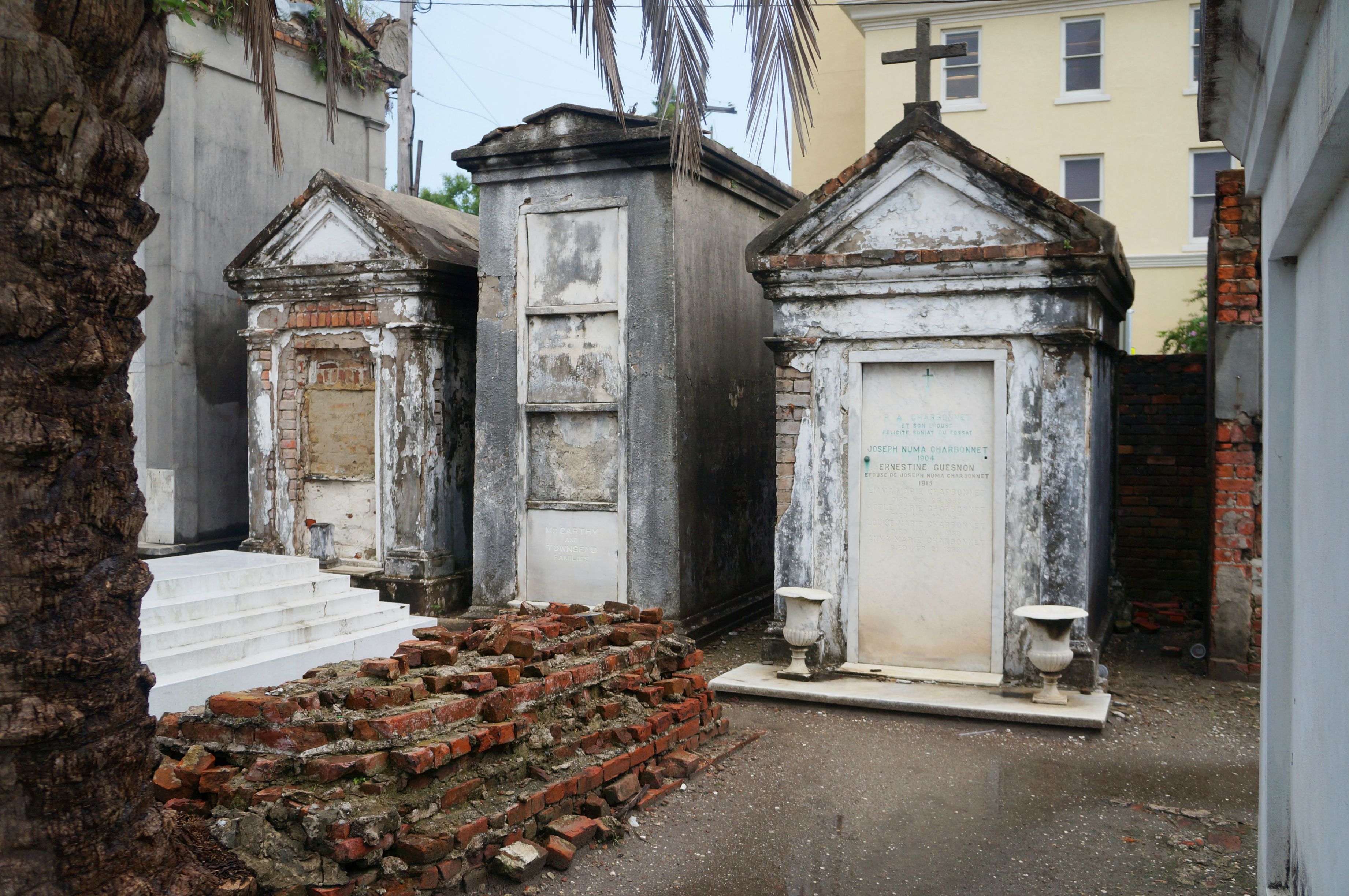 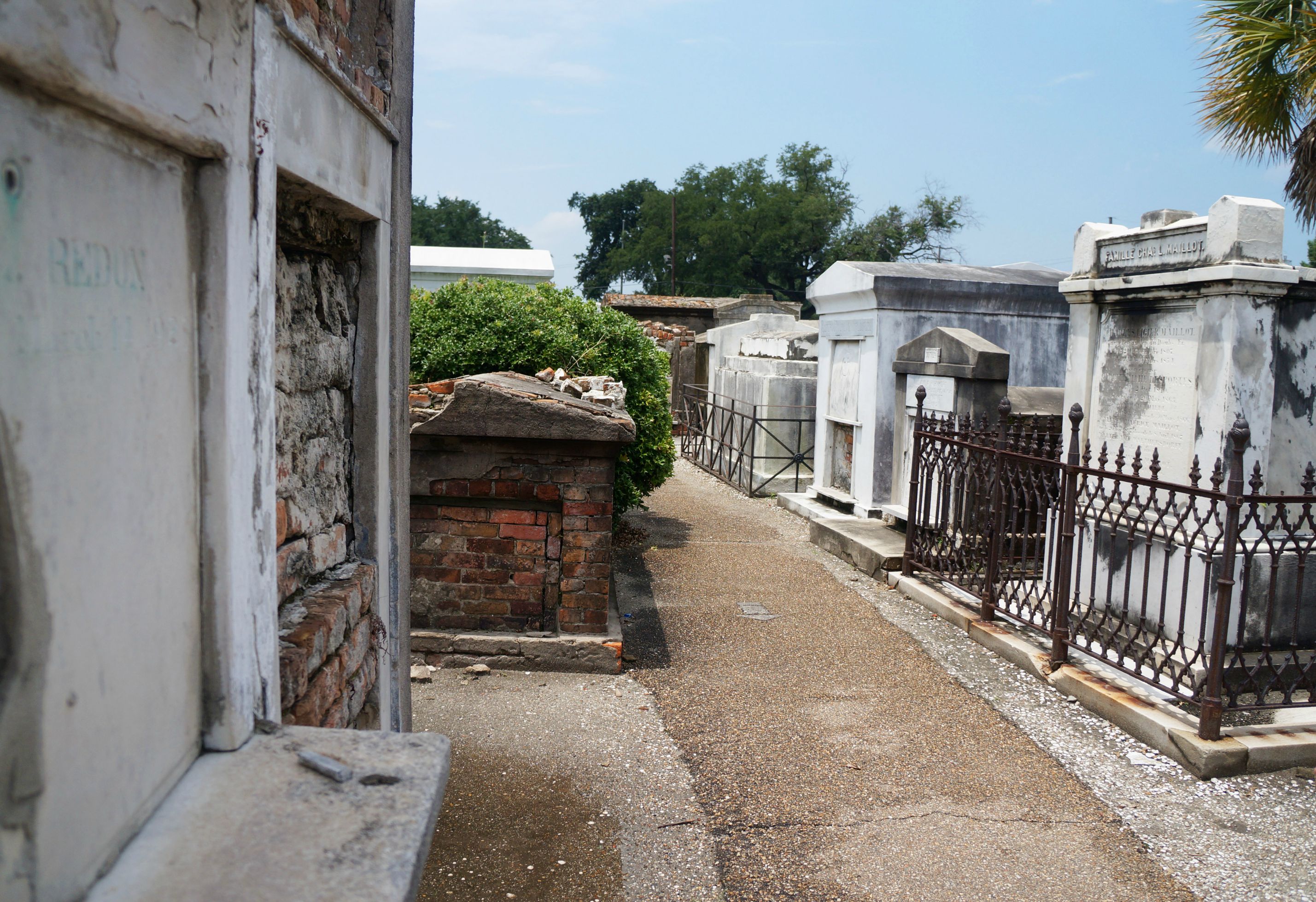 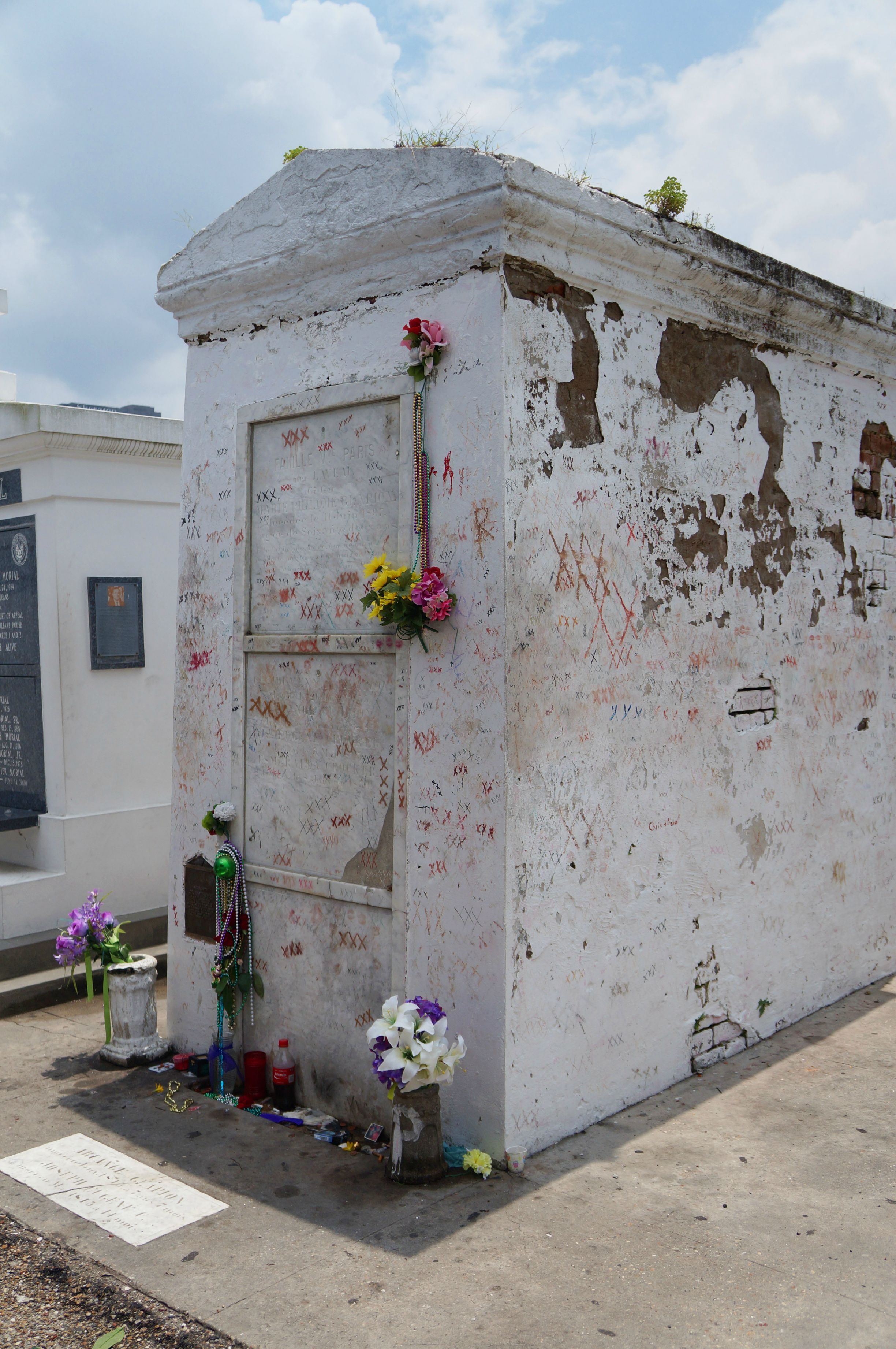 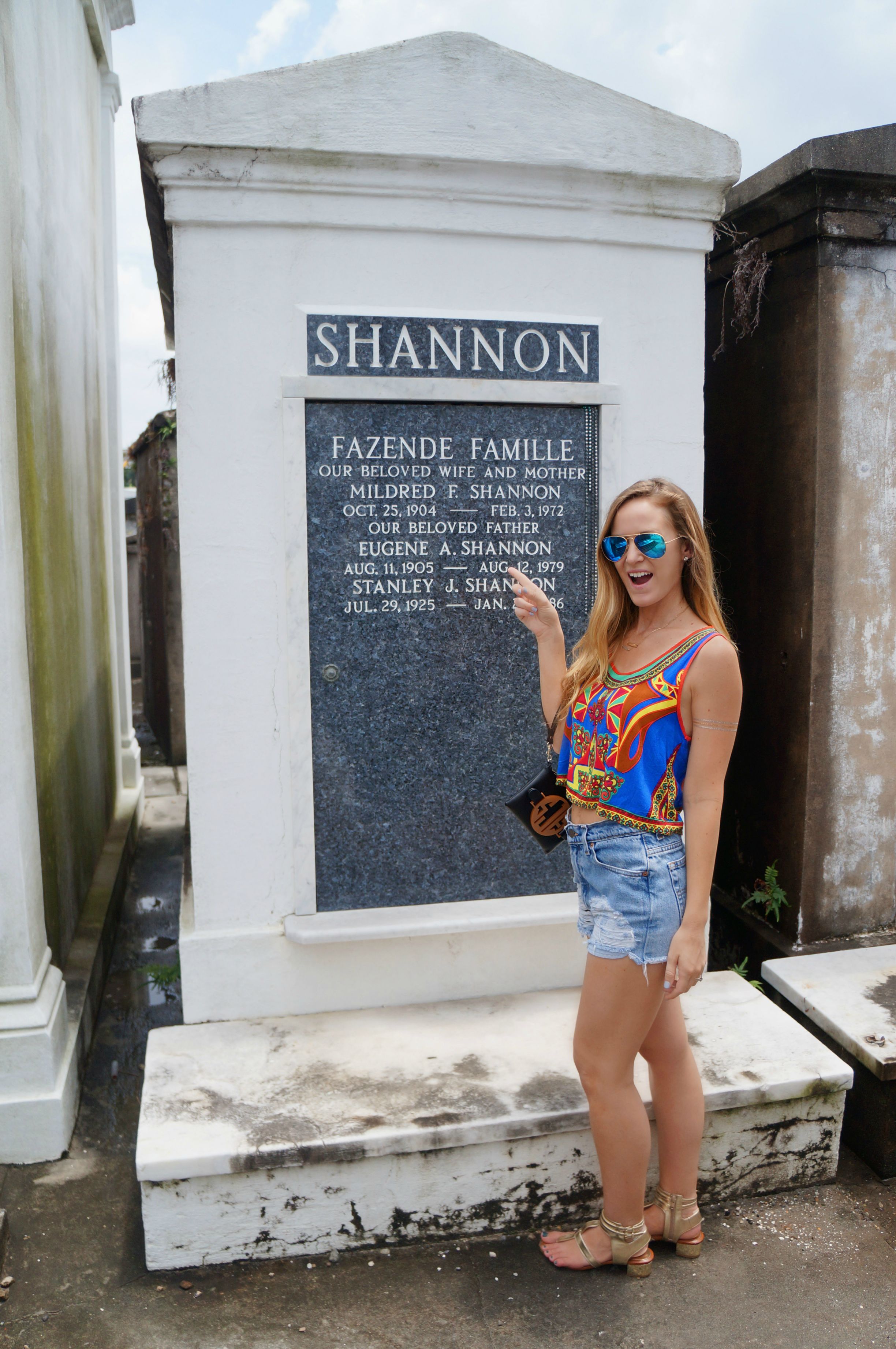 I even found my name! Not creepy at all… 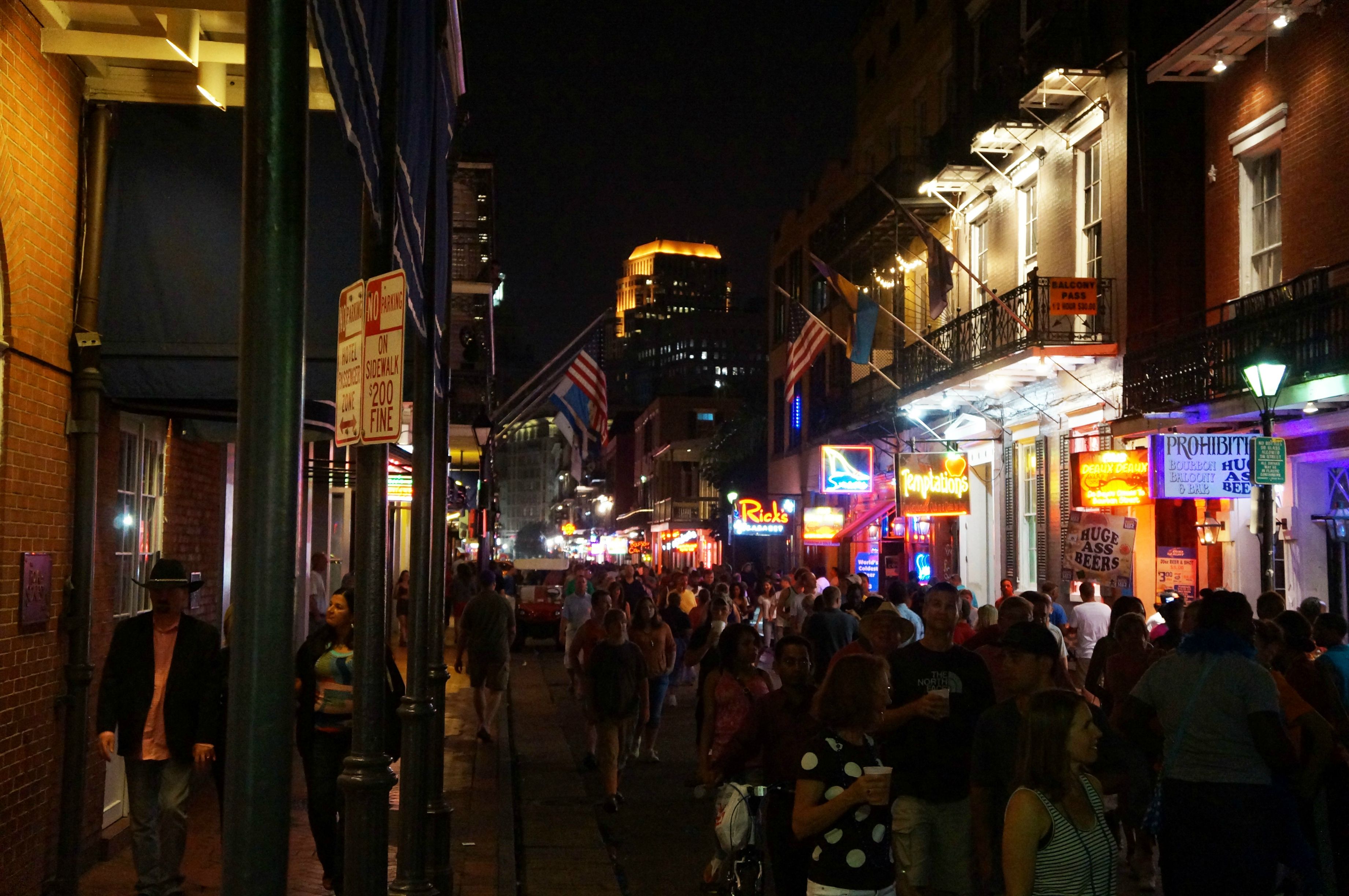 The infamous Bourbon Street, ya we didn’t spend too much time there! 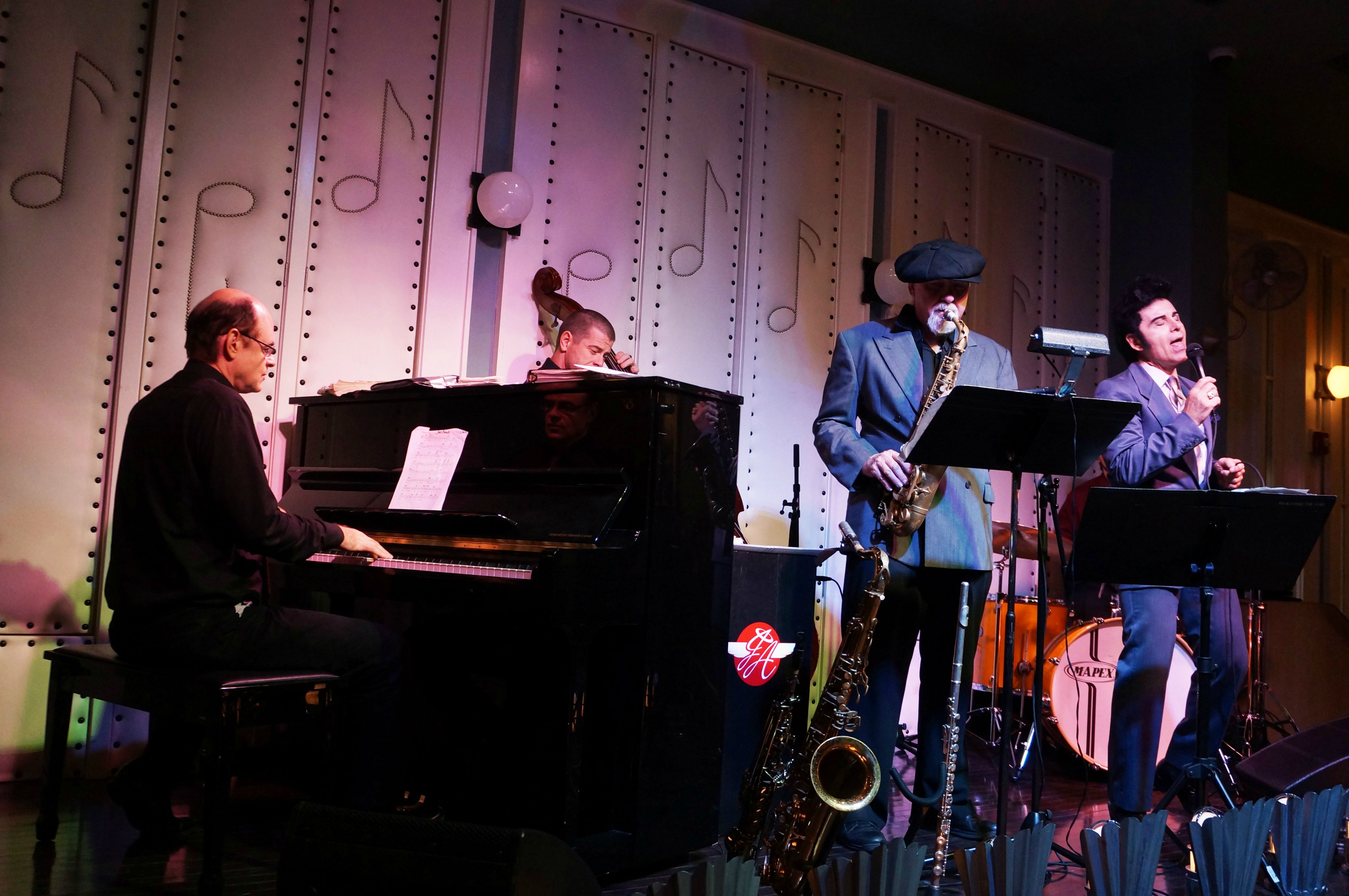 On our last night, we went to this super cute jazz bar called The Little Gem, which was amazing! I mean look at that hair?! I knew he was going to be awesome even before he sang! ;)
So all in all we had an amazing time! You will see a little more throughout the week within my outfit posts! I hope everyone has a wonderful Monday! ;)