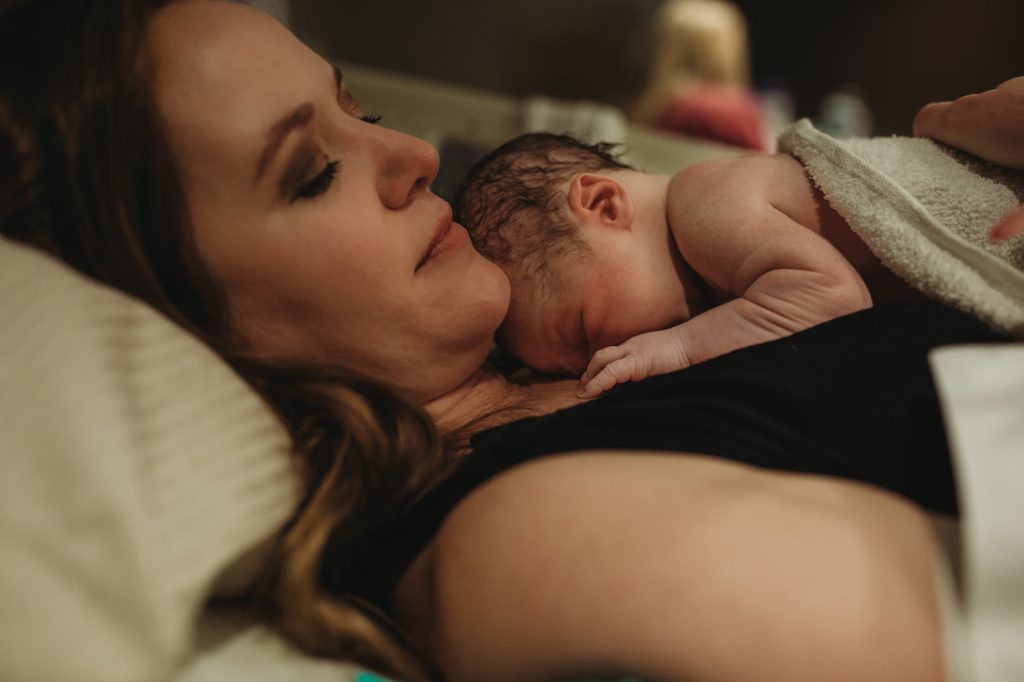 Happy Thursday babes! All I have to say is I am so ready for the weekend! So I FINALLY sat down to write the story of the most amazing (and tiring) day of my life, when Sawyer was born! I have been wanting to write this down for you and myself before I forget all the small details! And let me tell you there were a lot of details since I had such a long labor! About 27 hours to be exact! I am sorry but this might be one of my longest posts to date, but I will try to keep it as short as possible haha! Here we go!

I woke up on January 30th at about 3:30am feeling what felt like severe period cramps. I kind of shrugged them off at first because I had a few of these before so I tried to go back to sleep, but they kept getting a little stronger and they were very consistent. I woke Griffin up and told him, but I was still unsure if they were contractions because my midwife said a labor contraction would start at the top of your uterus (or abdomen) and these were in my back and very low pelvis. My midwife also told me not to call and to go straight to the hospital if my contractions were less than 4 minutes apart and these were about 2-3 minutes apart. So what do I do, call my mom! Of course she answered right away even though it is now 4:00 in the morning, and just says, “Is the baby coming?!” I just laughed and told her I wasn’t sure! ;p I then filled her in and she said they sounded like contractions to her and that she thought we should go to the hospital. Luckily we had everything packed so we left right away! It was so crazy and exciting to think that the next time we walked into our home we would have our little man!

We drove to the hospital that was 25 min away and were sent to triage to get checked. The nurse hooked me up to the monitor and yay, what I was feeling were contractions! And by this point they were getting more intense! My midwife came in and checked me and I was only 2cm! Boo! She said even though I was having steady contractions she would not be able to admit me until I was at least 3cm and she wanted me to not be able to talk or walk through my contractions…. uh wonderful. She gave me the option to go home and labor there or stay there and walk around the hospital to see if I could progress more. At this point we were already there and since we live a half an hour away, we decided to walk. And we walked and walked and walked. We started to work up a sweat so we decided to head outside since it was a cool day out. Funny story: so if you follow Amber Fillerup she was due with her 3rd baby a few weeks after me and she asked on an IG post if anyone new any great ways to induce labor naturally. She had soooo many replies so I read through them just incase I needed to use them myself haha! Well there was one comment of an OB nurse saying she swears by ‘curb hopping’. Basically you walk along a curb with one foot on the curb and the other on the ground so you kind go up and down while you walk haha! So you better believe I was doing that around the parking lot and I think Griffin was embarrassed to walk with me! Ha!

We went back up after about an hour and half to get checked again and I was still 2cm! Nooooo! My nurse said the baby was face up and that was probably why I wasn’t progressing so she had me lie on my side with a peanut birthing ball in between my legs. Let me tell you how uncomfortable that position was while having contractions omg! They also gave me a medication to relax to see if that would help my cervix open more, nope! Still 2cm! After being there about 6 hours (11:00am) we had to go home and labor at home! She told us to come back when I couldn’t walk through my contractions. The nurse told me she didn’t want to send me home since she new I would be back later. She was so sweet!

So we made the dreaded ride back home, so nervous! My contractions hurt so bad how will I know when it is time to go back! Griffin was like I swear if you have this baby at home! haha! My mom met us at the house and I just tried to relax and did the positions the nurse told me to do to try and get him to turn. My mom and I decided to go for a walk and about half way down the end of our street I told her I don’t think I could go any further. I was in so much pain! It was about 4:00pm now and we decided to go back to the hospital.

They welcomed me back into triage and I said a little prayer that I was dilated enough haha! At this point I was over the contractions! They checked me and I was almost 4cm! Praise the Lord! They admitted me and sent in the anesthesiologist to get my epidural right away. I could have kissed them haha! The epidural was not bad at all, but felt soooo weird! My left side was so numb and the right side I still had feeling and could move my leg a bit but had no pain. I hated that I couldn’t feel my left leg so they tried rolling me to even it out but nothing worked so I had to just bare with the weird sensation. Then the waiting game started!

Griffin’s parents and 88 year old grandma (bless her) and my dad came to wait it out with us and even Griffin’s brother from Miami headed up our way. They kept checking me and I was progressing but slowly. We all hung out and they ate dinner while I drooled over their food since I couldn’t eat with the epidural haha. My brother showed up at about 10pm and of course got me laughing! I was feeling a weird sensation so I called in the nurse and she told me my water was leaking! Woohoo! She said I would hopefully progress faster now! A few more hours went by and she went to check me and the rest of my water broke in her hand haha! She said I should get some rest since hopefully I would start to push in a few hours and I hadn’t slept all day. Everyone left to go in the waiting room besides my mom and Griffin and we tried to nap. Which was so hard for me! 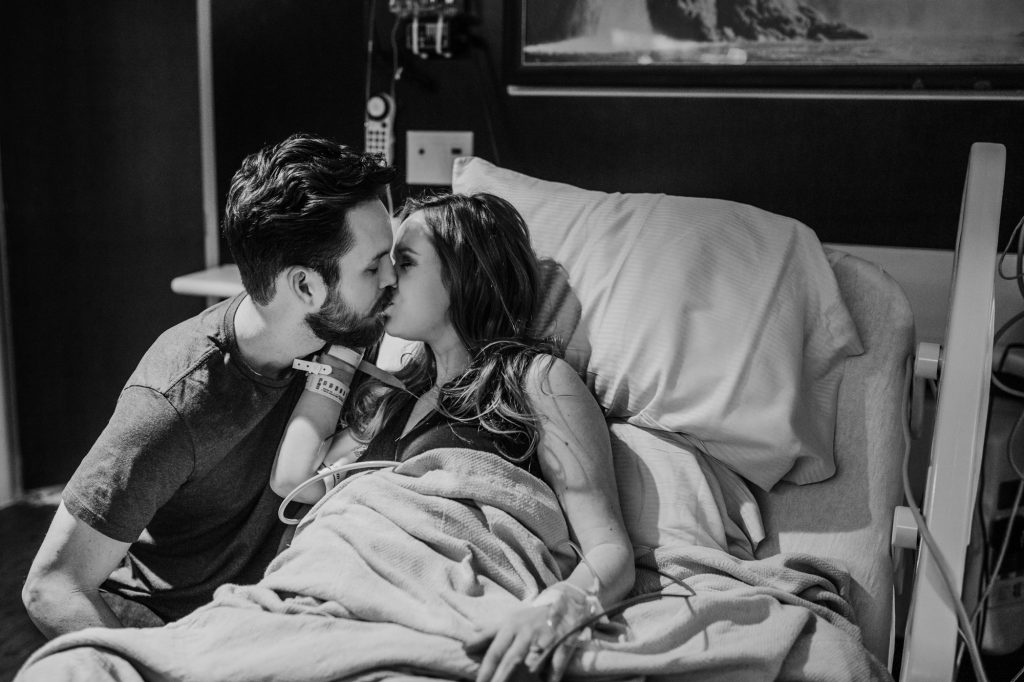 Finally at about 4am she said I was ready to push! Ya’ll pushing when you can’t feel anything is hard! I pushed for about 20-30 min and she said she wanted to drop my legs in the bed and wait about 30 min to see if his head would drop a little more naturally so I don’t get worn out. She came back in at about 5am and we started to push more. She brought the mirror out so it would help me see what was going on so I could push better, which was really cool, but I felt like it was doing the opposite because I needed to close my eyes to concentrate so she took it away and set up a bar with a sheet wrapped around it so I could pull on it while pushing, which helped a lot! My midwife came in a little after 5:30am and took away the sheet and had me push normally again and about 5 pushes later at 5:56am January 31st our beautiful baby boy was here! Sawyer Grey Jenkins weighing 6lbs 10oz 19.75 inches long! All I kept thinking was how beautiful he was and I could not believe how much love I had for him already! Even if he peed on me as soon as I pulled him on top of me haha! My midwife let me pull him out which was such an awesome experience! Griffin cut the cord too! At this point I was so overly tired, but yet so happy at the same time! You can tell by my face in the pictures of how tired I was haha! My mom was like I have no idea how you pushed him out after being up for 27 hours! I guess it was the adrenaline of meeting our baby boy! We ended up staying in the hospital for two days and went home on my due date February 2nd and our lives will never be the same! <3 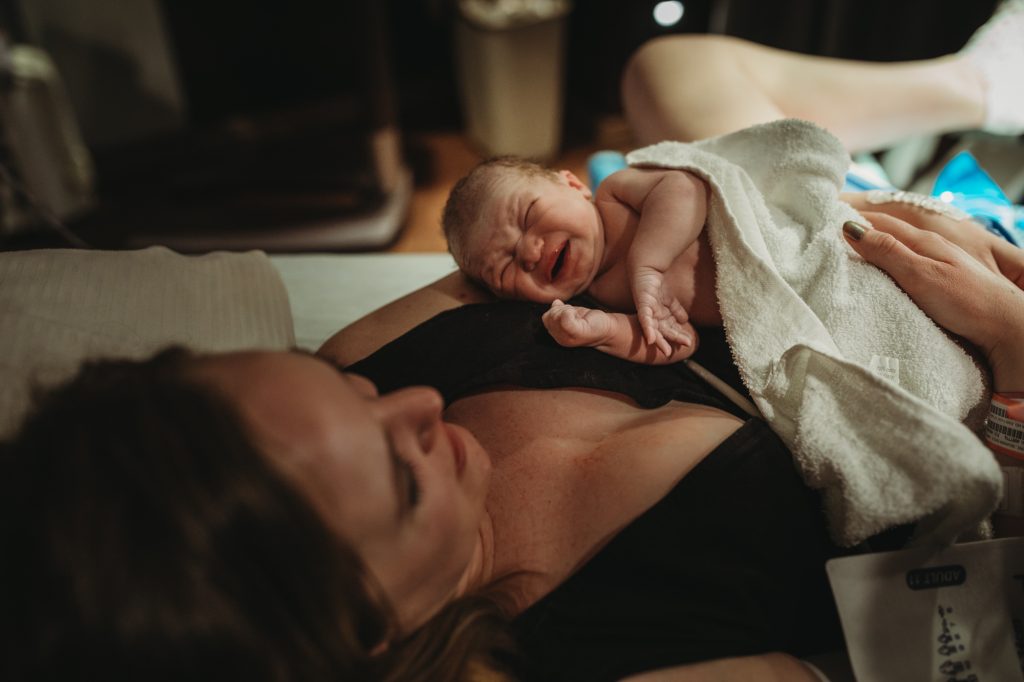 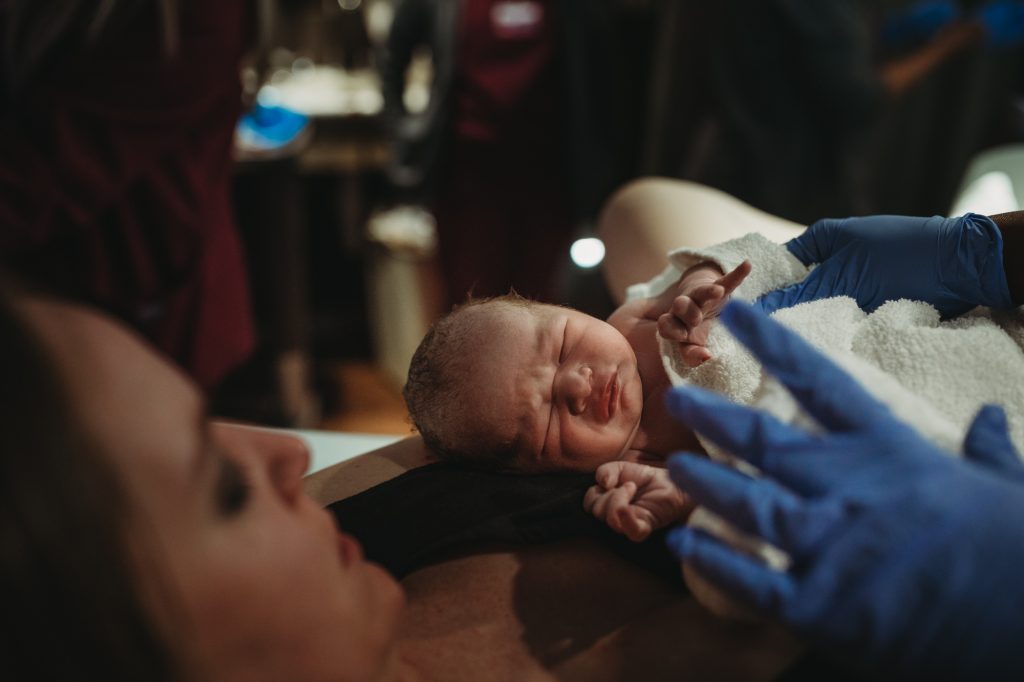 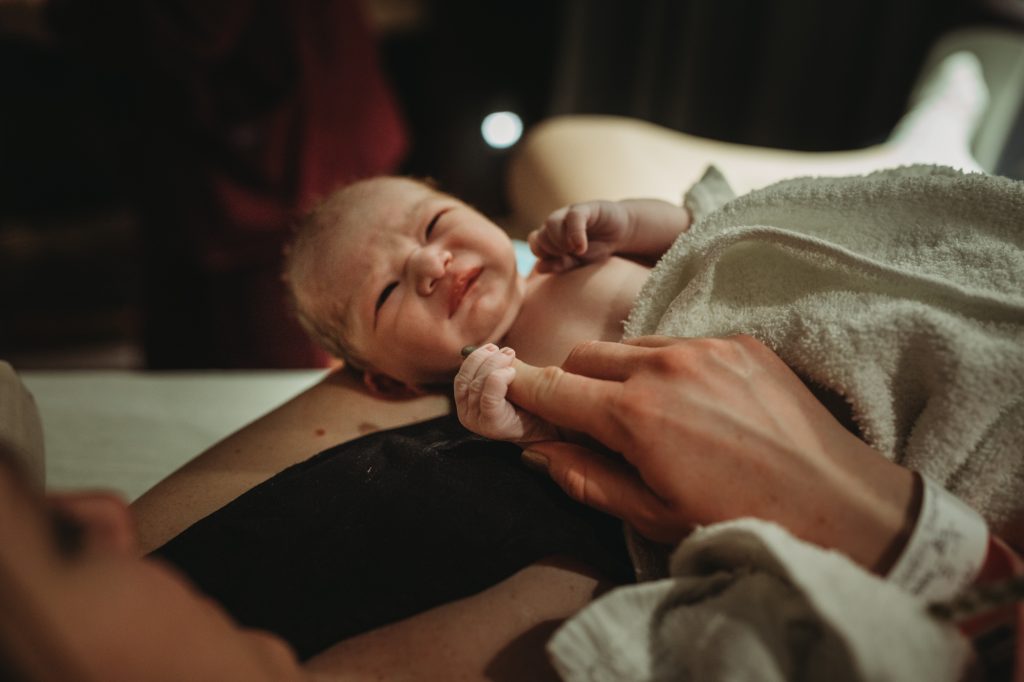 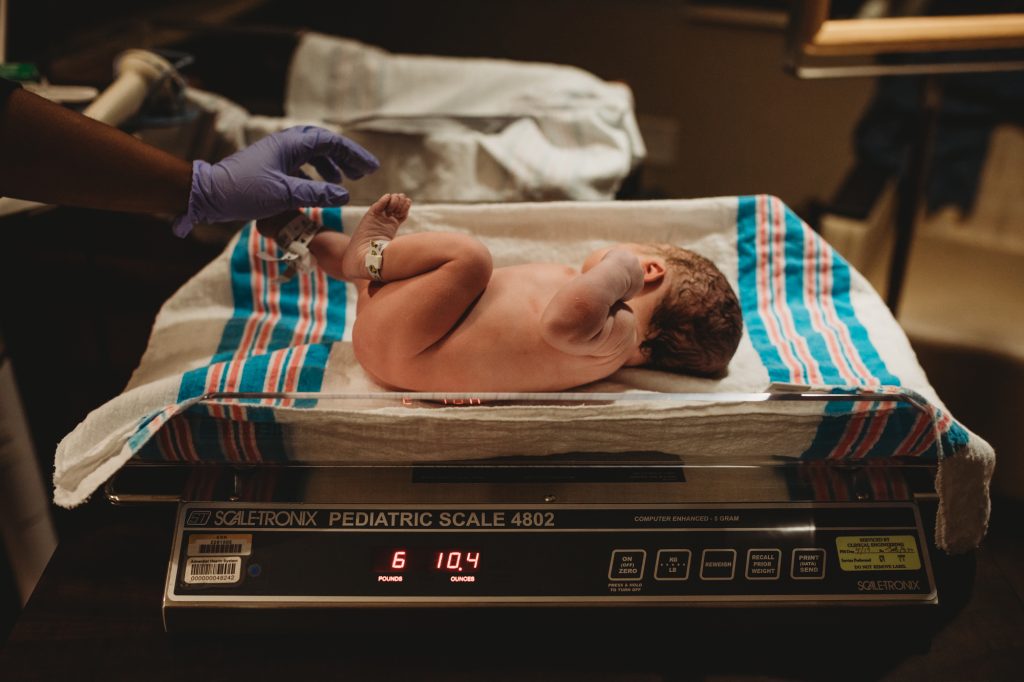 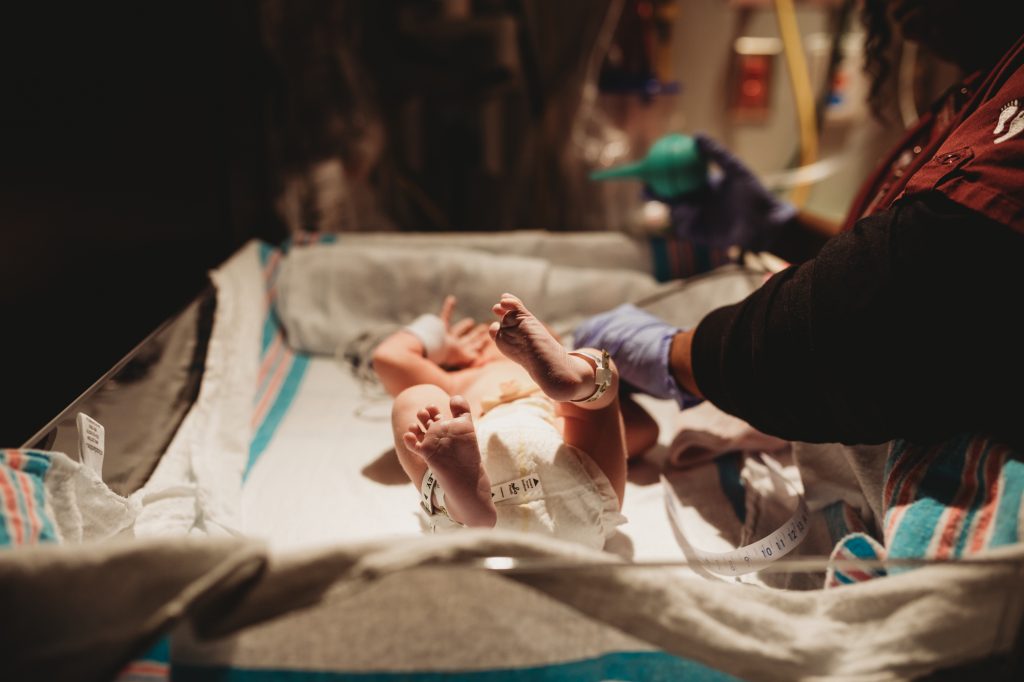 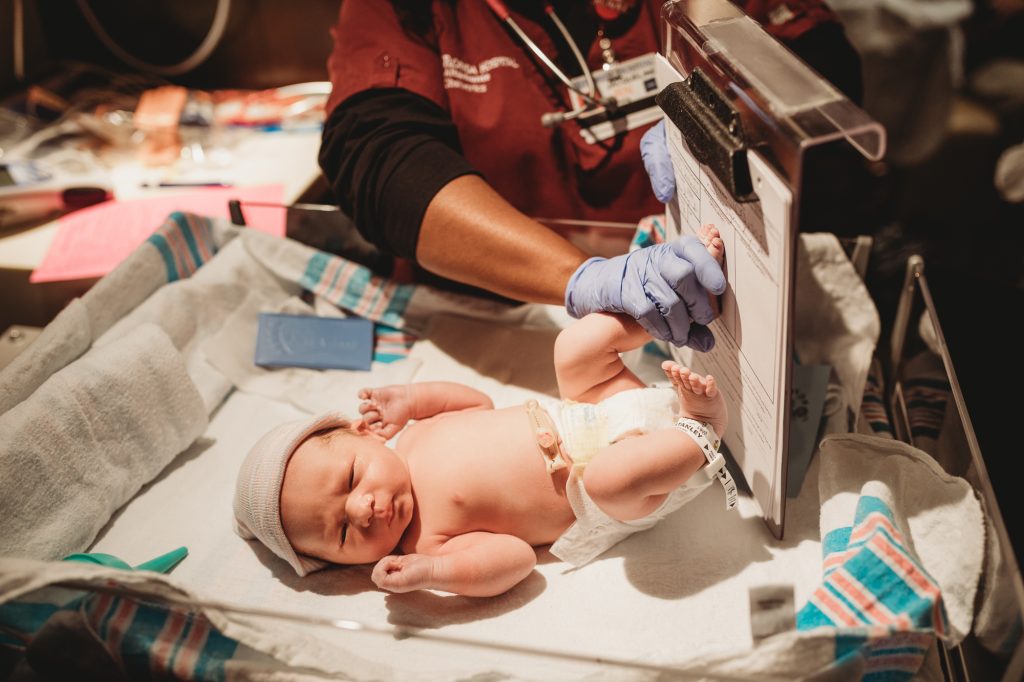 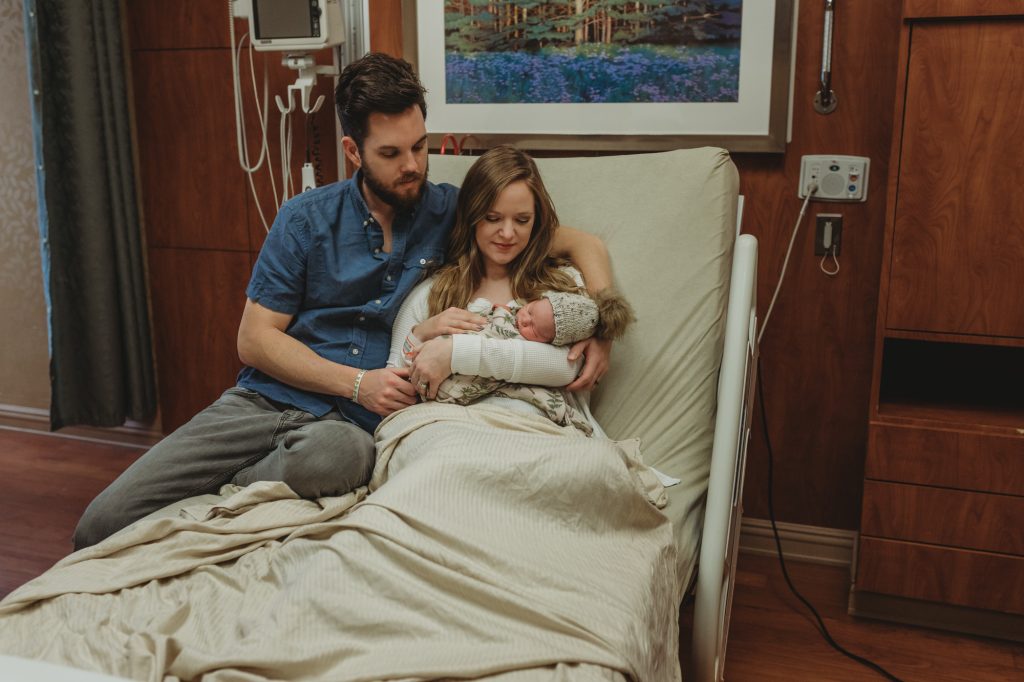 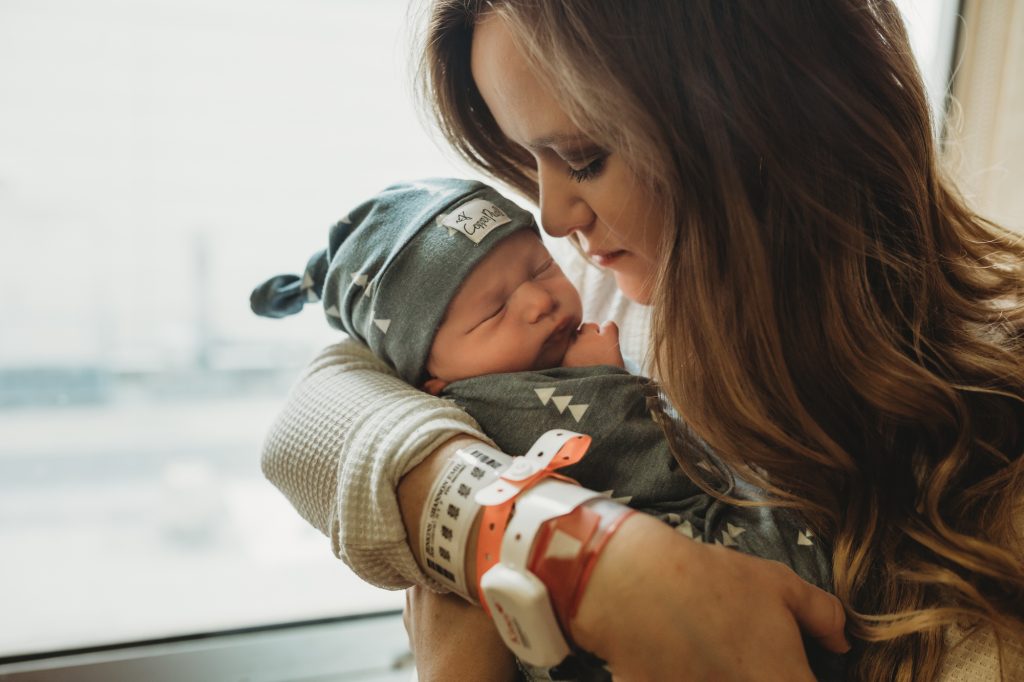 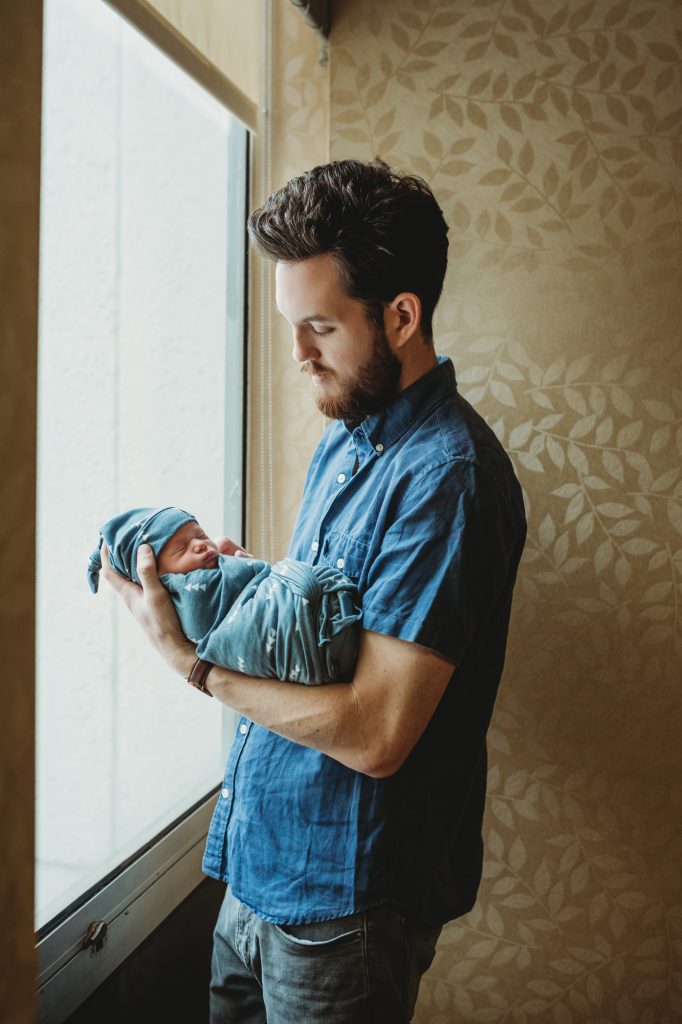 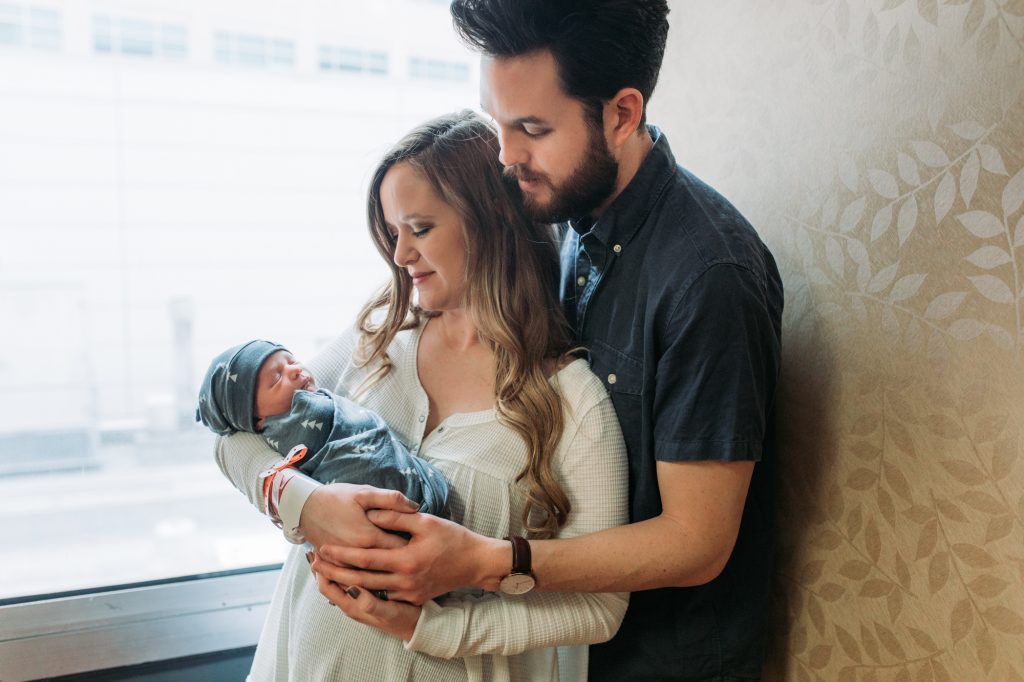 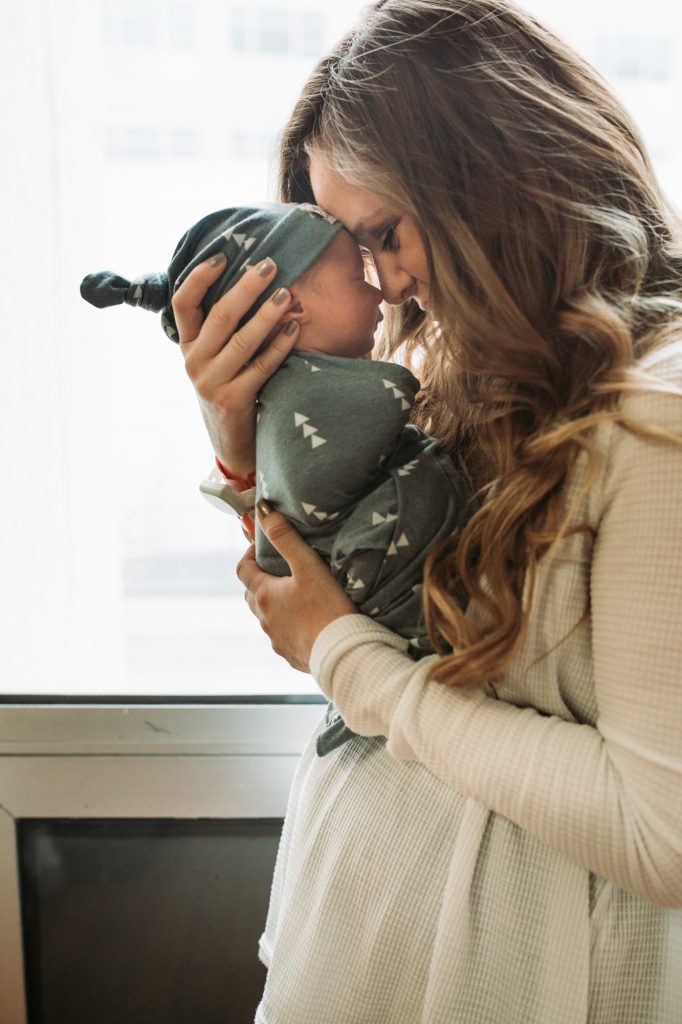 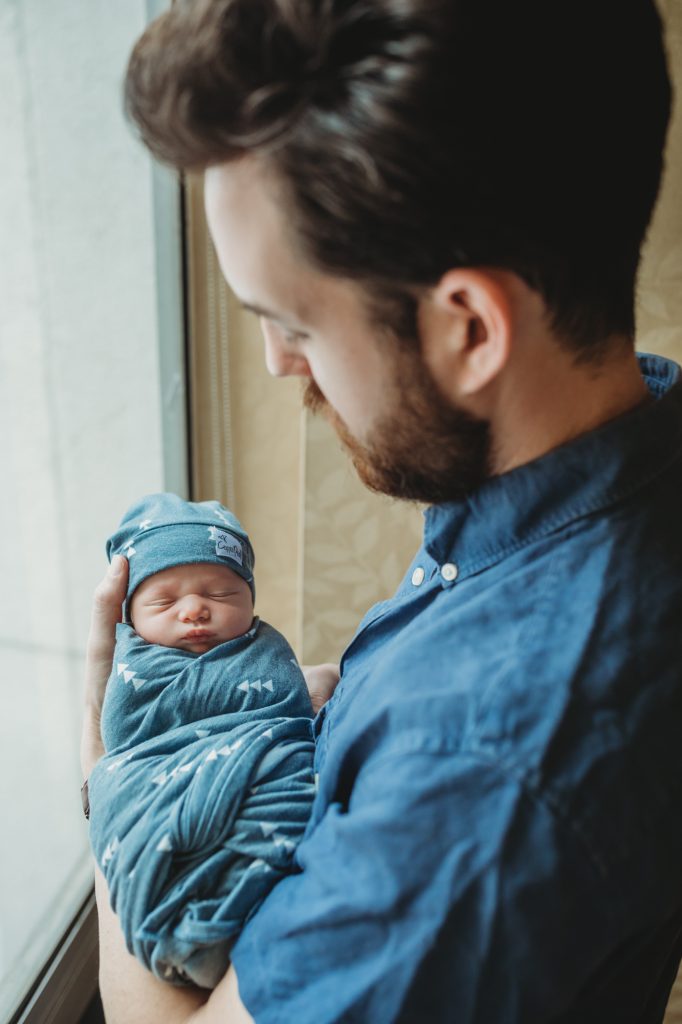 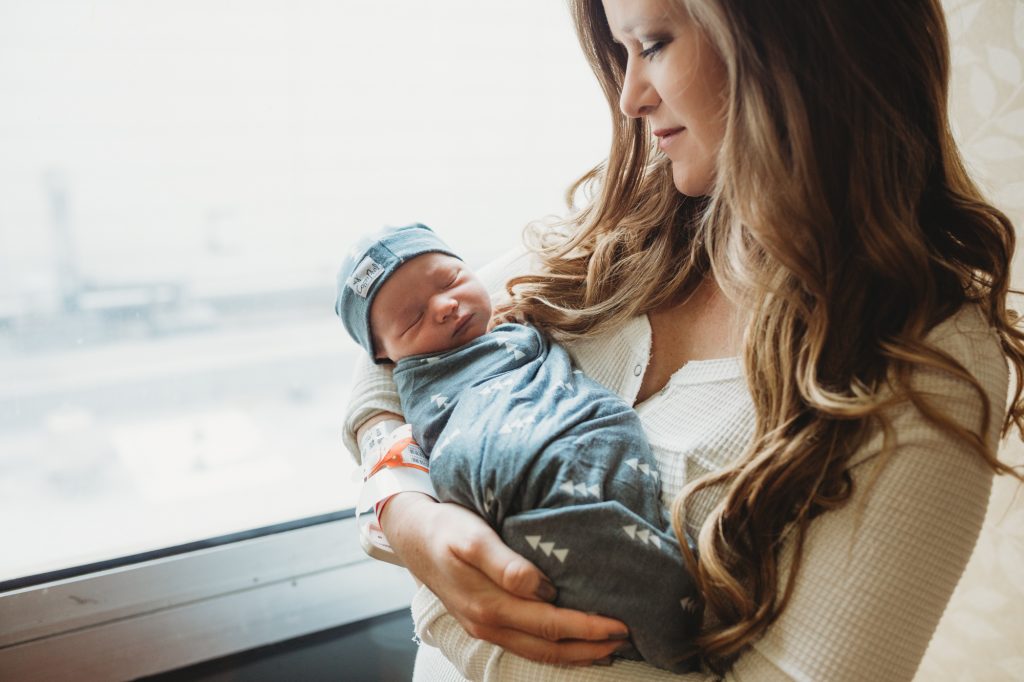 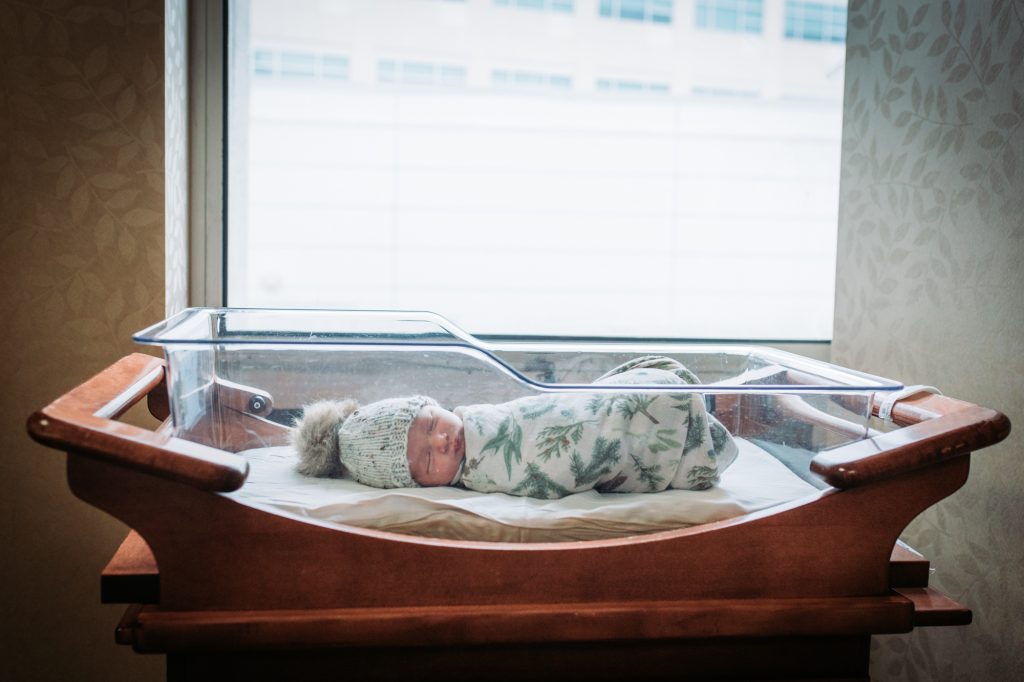