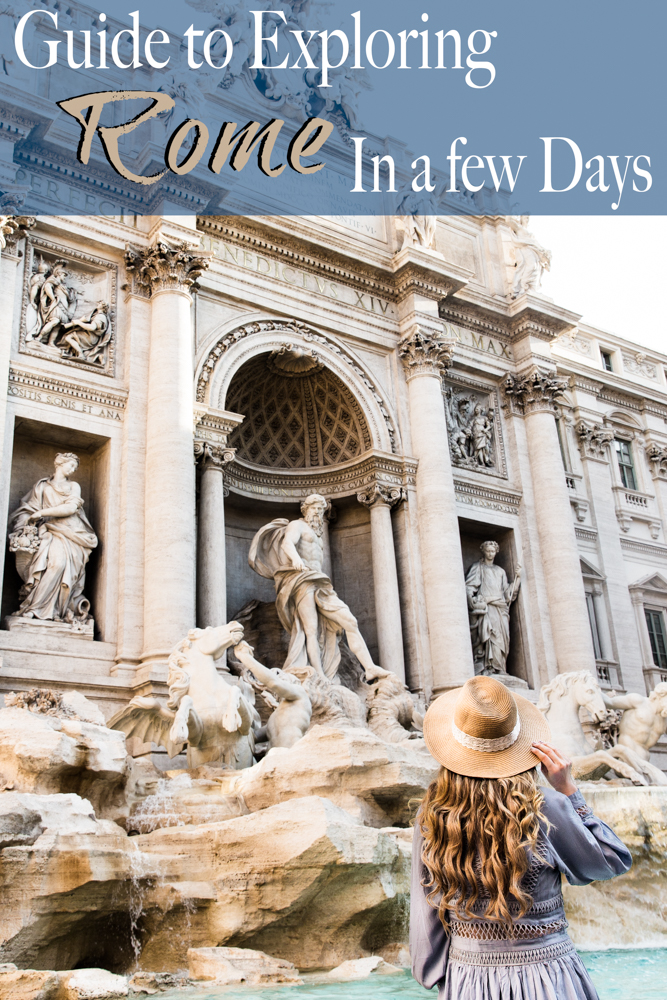 Happy Hump Day babes! Today is my Friday and I can’t wait for our mini family getaway tomorrow! So we are officially on the last city of my Italy trip, Rome! Rome is pretty much THE city you have to see when going to Italy! The history is just out of this word and there is so much to see in so little time! We jammed it in while in Rome but also found some time just to relax since we were pretty exhausted at this point! Let’s get started! 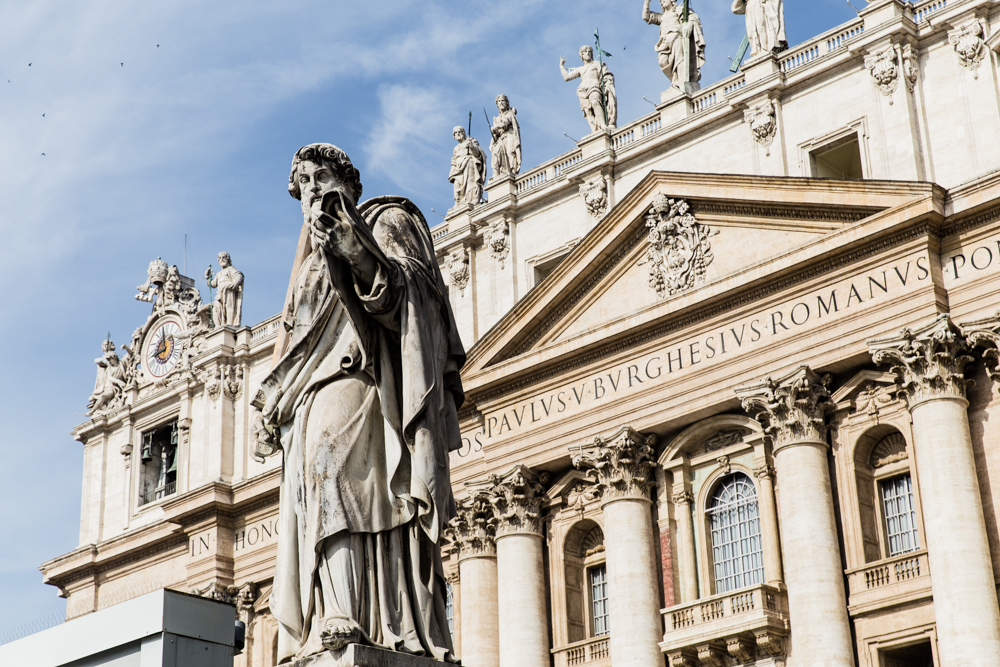 We woke up bright and early and hopped on a train to Rome. As soon as we got there we dropped off our bags and headed straight for the Vatican. I highly suggest going to St Peter’s Basilica as early as possible! We got there around 8:30 and by the time we left the line was wrapped around the whole square! It was crazy! Once you get inside the Basilica it is just sensory overload! 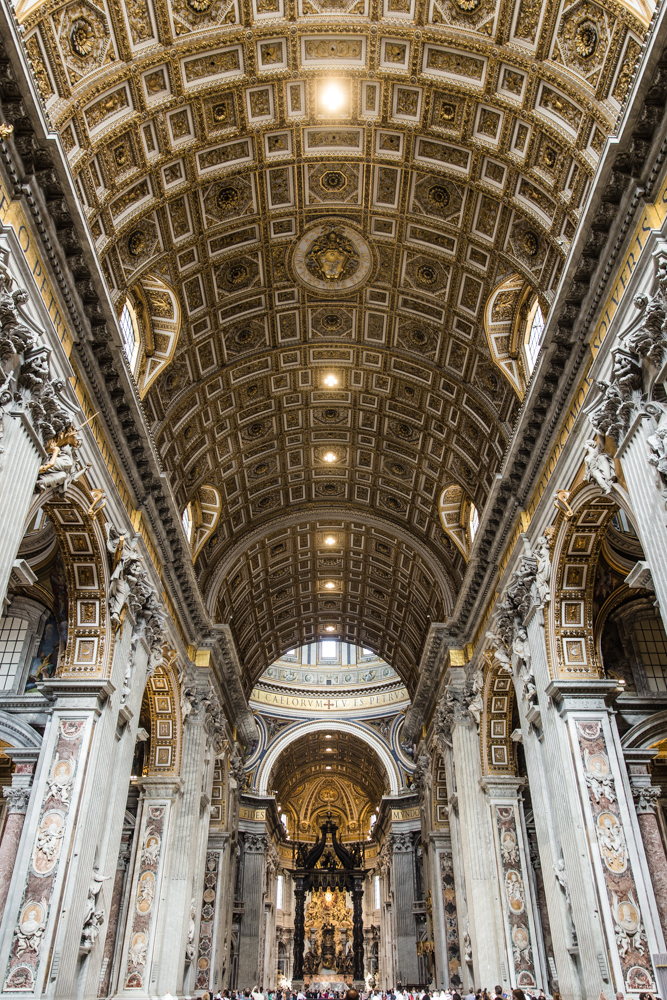 The detail is just insane! There are sculptures, mosaics, marble, everywhere you look and the church is absolutely HUGE! Seriously the most beautiful church ever and to just think that they did all of it before modern machinery. Just so crazy! You can definitely see why it took 12o years to build! 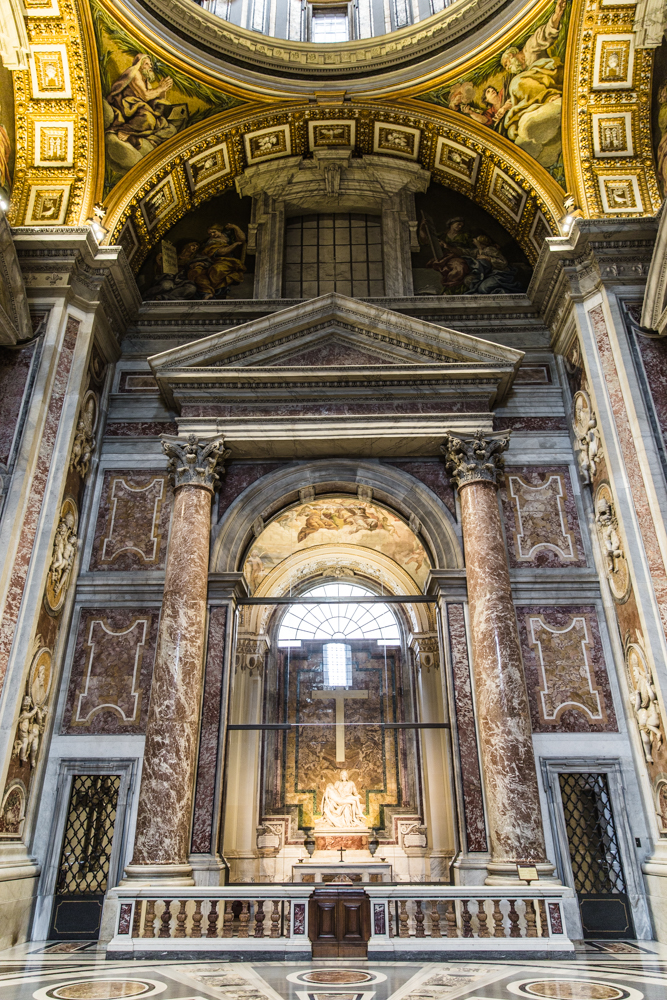 The Pieta sculpture by Michelangelo of Mary holding Jesus. 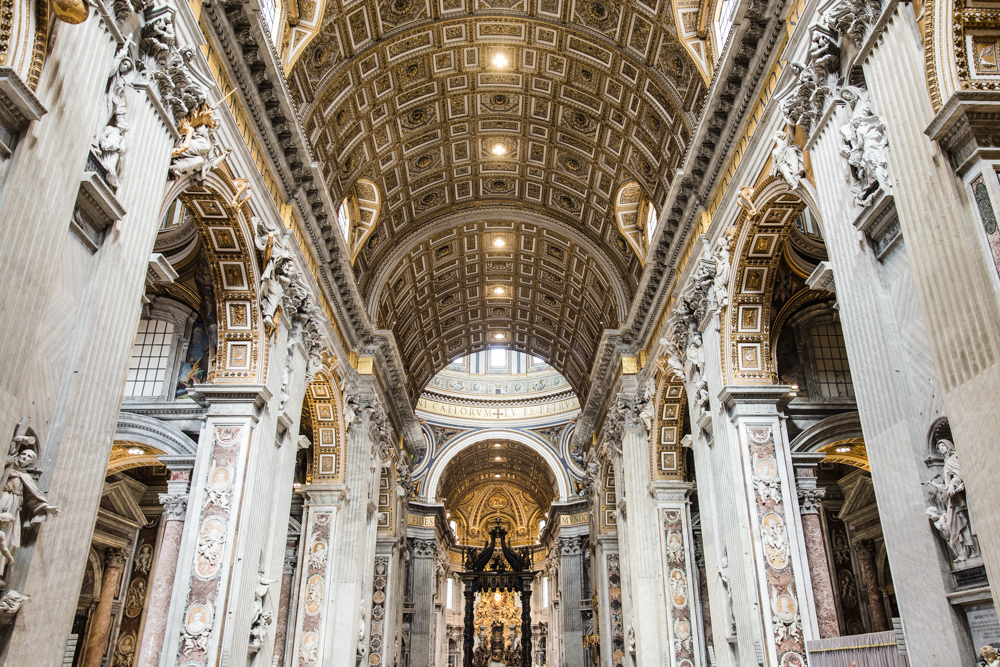 After taking in all the beauty inside the Basilica we decided to go up into the the dome to check out the views of Rome from the top. Disclaimer: we paid an extra 2 euros to take the elevator and it was still a major hike and VERY claustrophobic! I don’t think I would do it again because I don’t do well in tight spaces haha! At least the view was pretty! 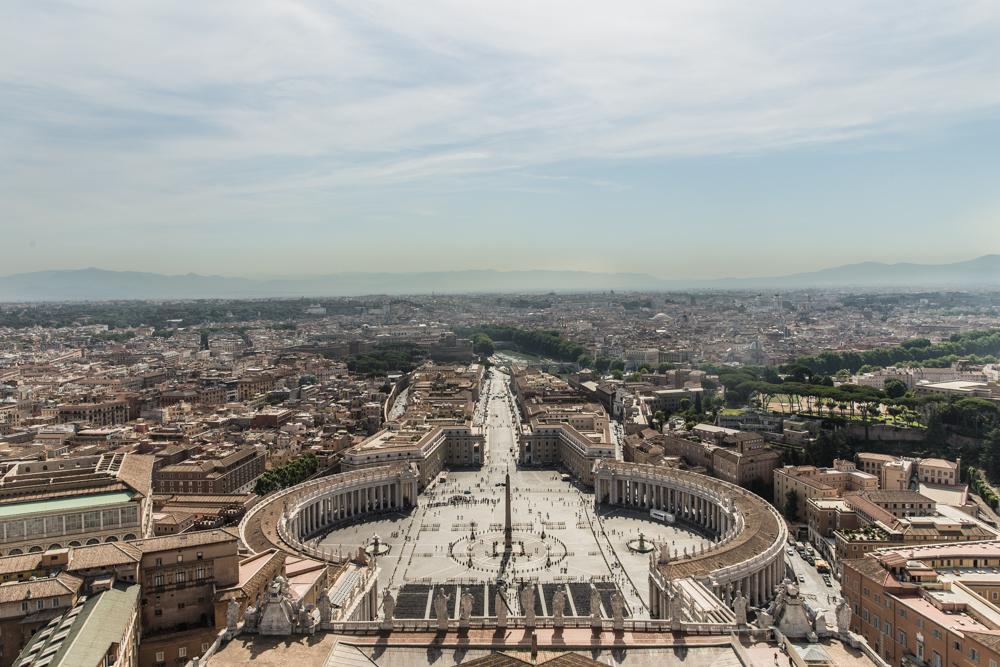 It was an amazing view of all the Bernini sculptures. Can you believe one man did all the sculptures around the whole St Peter’s Square?! After we about had a heart attack from our hike we headed to the Vatican Museum and Sistine Chapel. This is another place to get your tickets in advance to skip the lines! 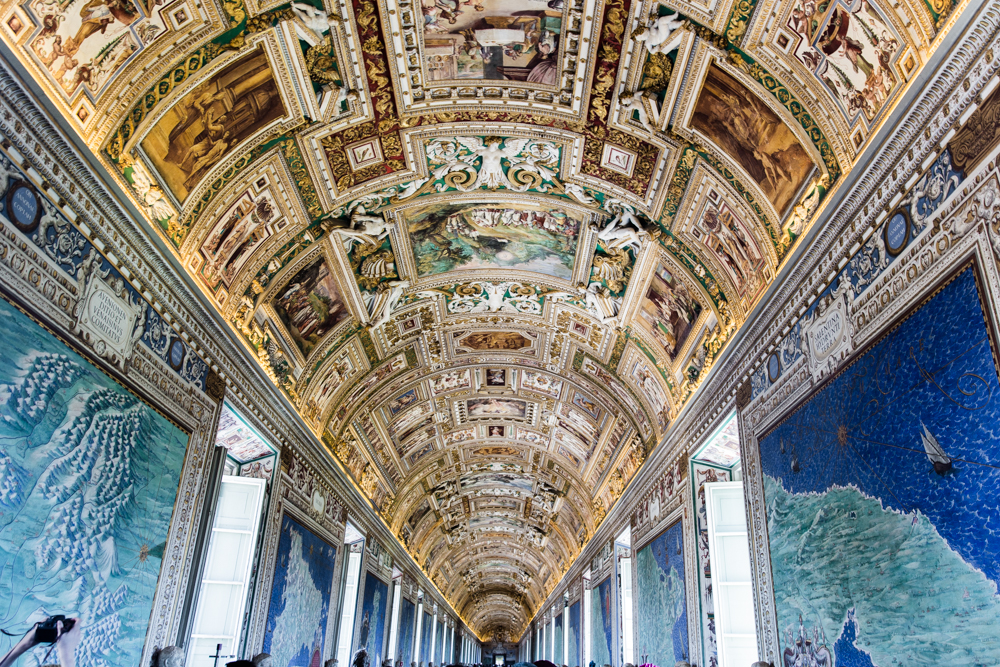 Another sensory overload ya’ll! Pictures just can’t do it justice. 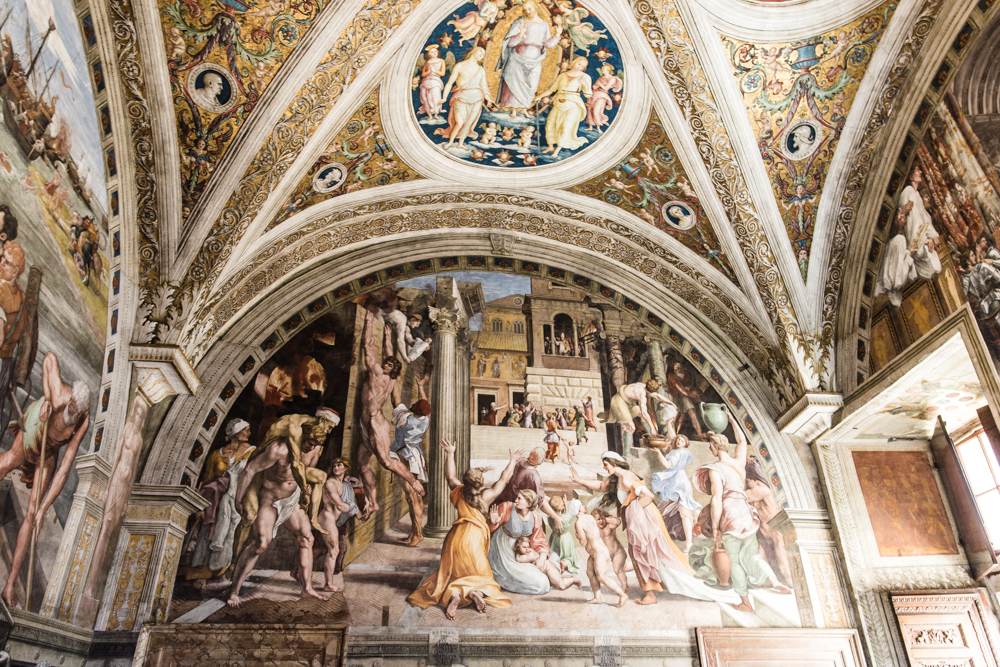 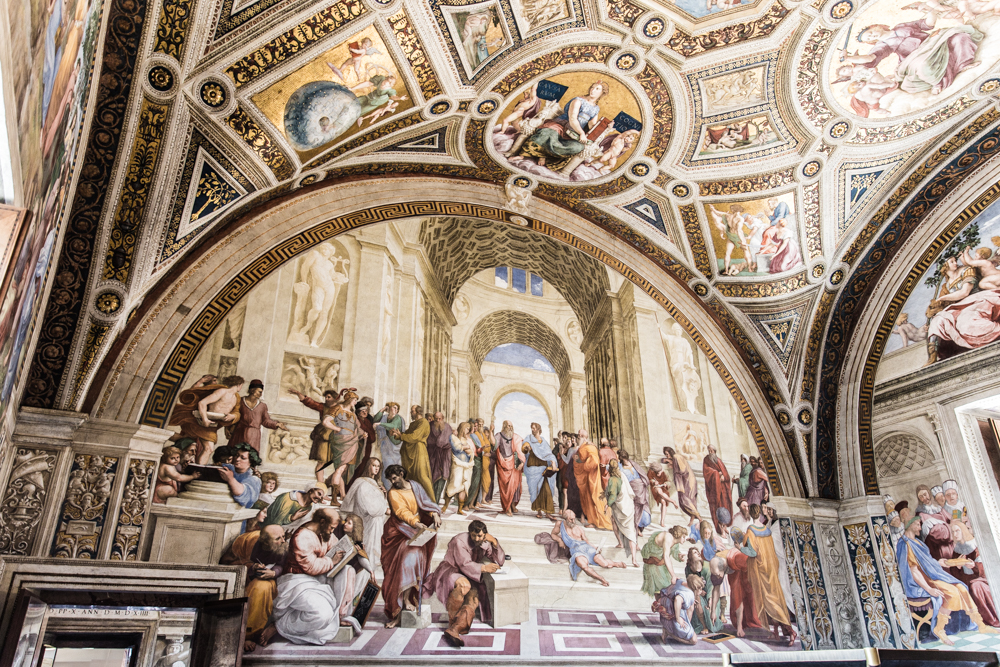 The Fresco School of Athens by Raphael. 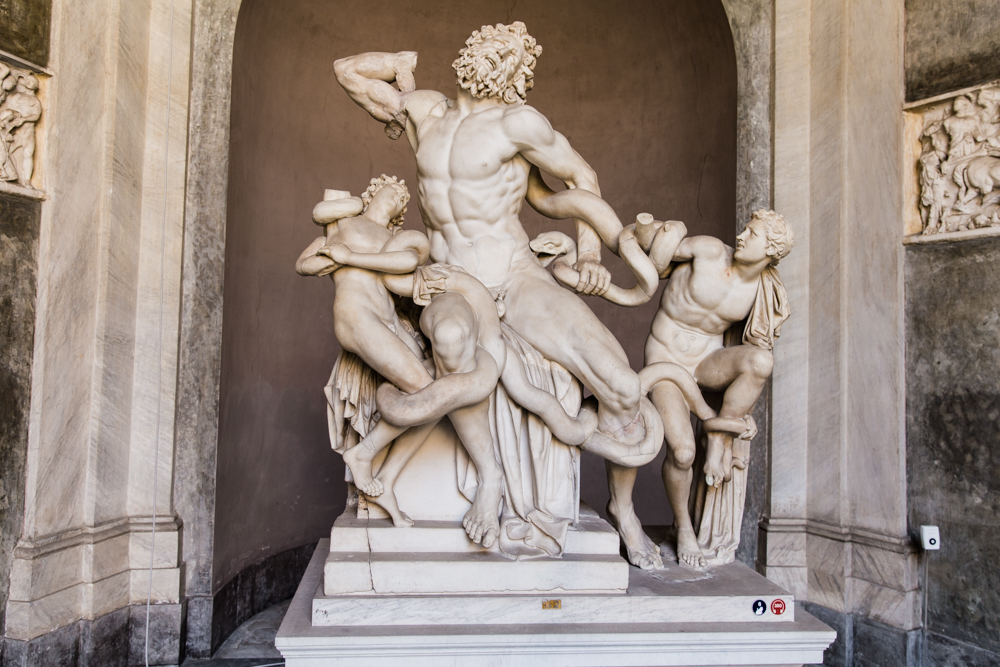 The original Laocoon and His Sons sculpture.

Unfortunately you are not aloud to take pictures inside the Sistine Chapel which kind of sucks and they are VERY strict about it! Although it is so amazing to see first hand! You never realize how big it is and just to think Michelangelo did the whole thing by hand and by looking up from a scaffolding! My neck hurts just thinking about it! After the museum we headed back to our place and grabbed some lunch at Forno which we ate at a lot since it had the best pizza and right by our Airbnb! We relaxed and took a nap (we were up early) then headed out for some drinks before dinner at Bernini Ristorante. Be sure to make reservations and request to sit outside so you can enjoy the view of the gorgeous square! Also the food was amazing! Probably one of my favorite meals! 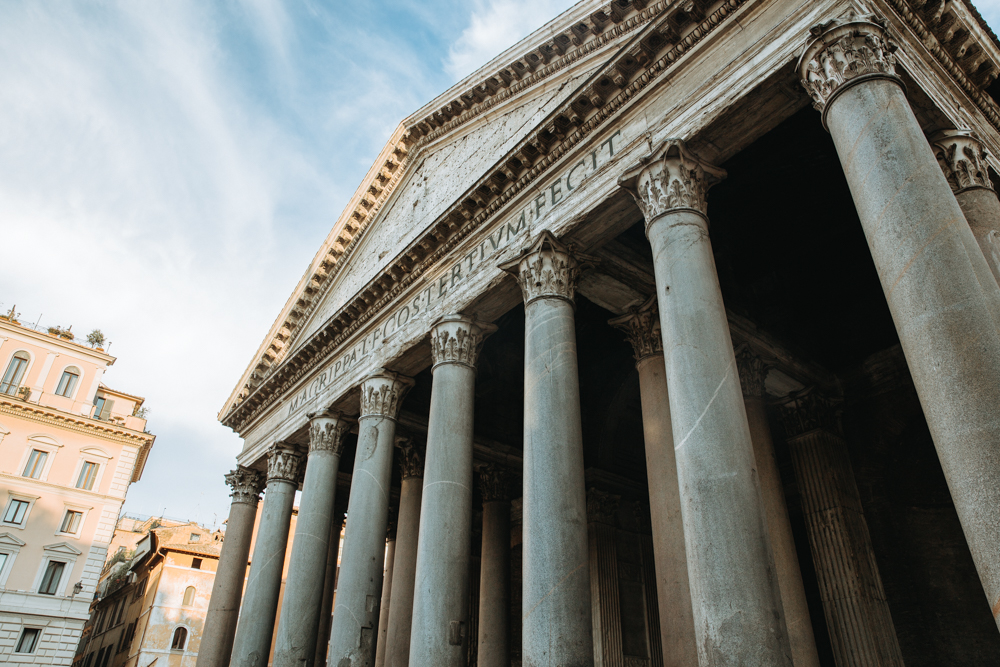 The next day we headed out for a little sight seeing before our tours at the Colosseum. If you want to beat the crowds, especially for pictures, the earlier the better! I could not get over how huge and gorgeous the Pantheon was! The building was built before Christ! Just crazy! 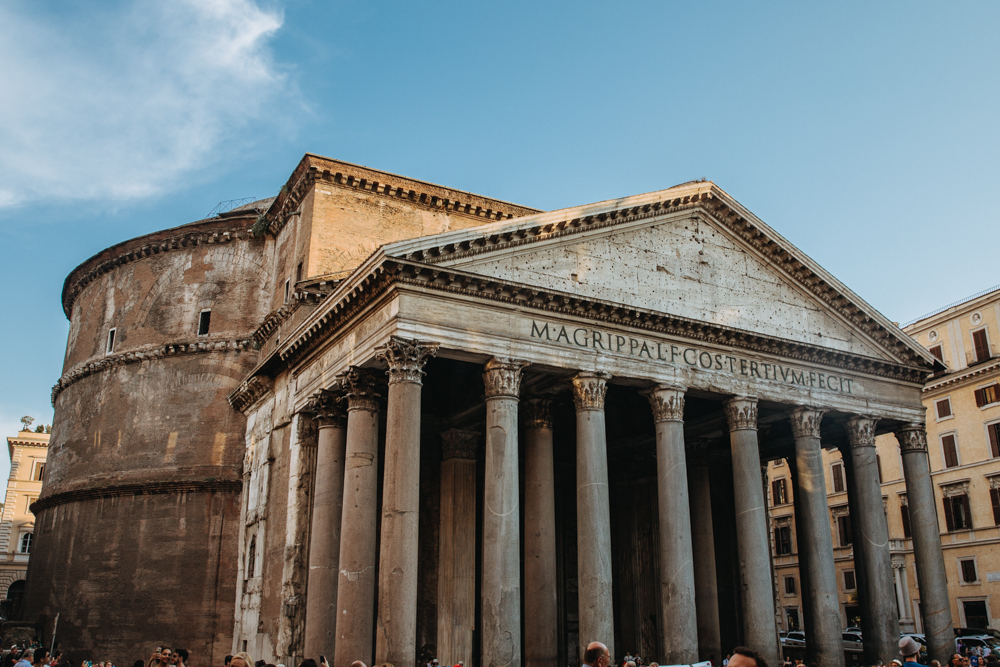 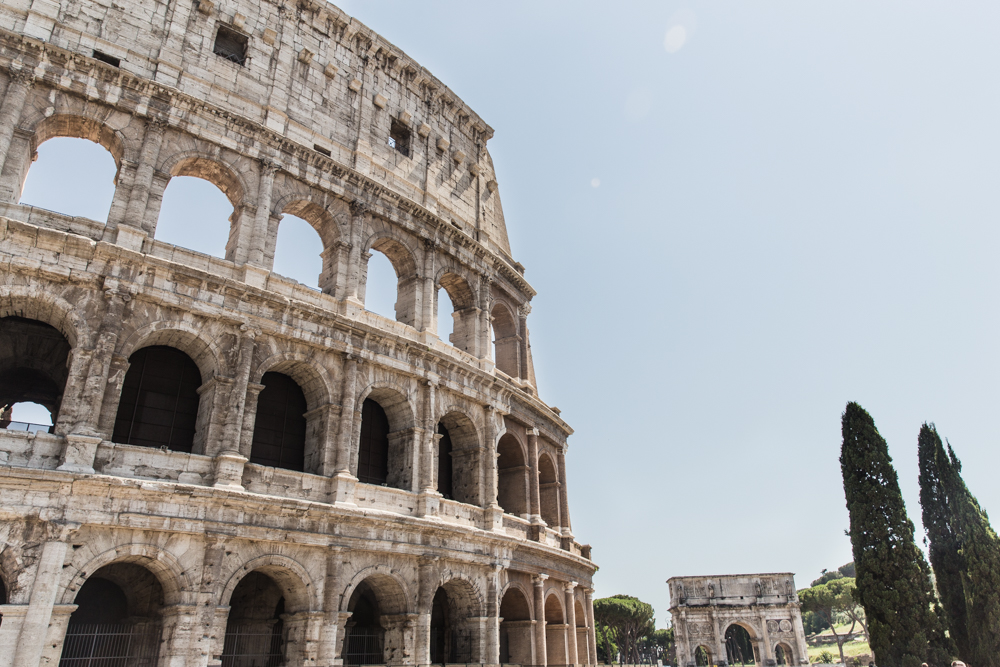 After some sight seeing we headed to the Colosseum for our tour. We did the underground tour which was super cool since we don’t get to go down there with the general admission. It’s pretty awesome getting to go where all the gladiators got ready to fight and where they kept the animals. 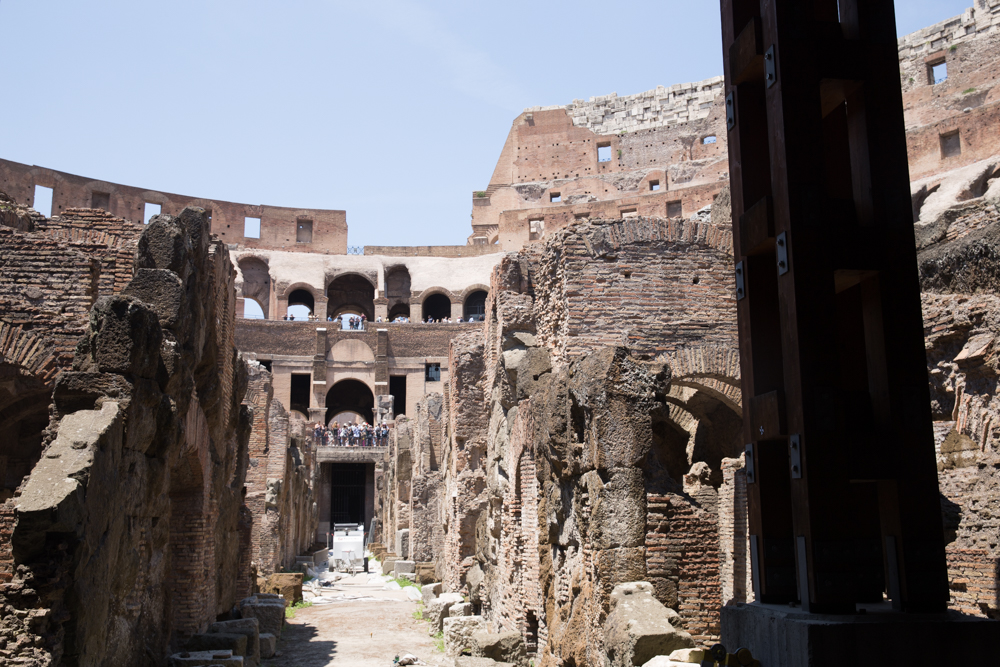 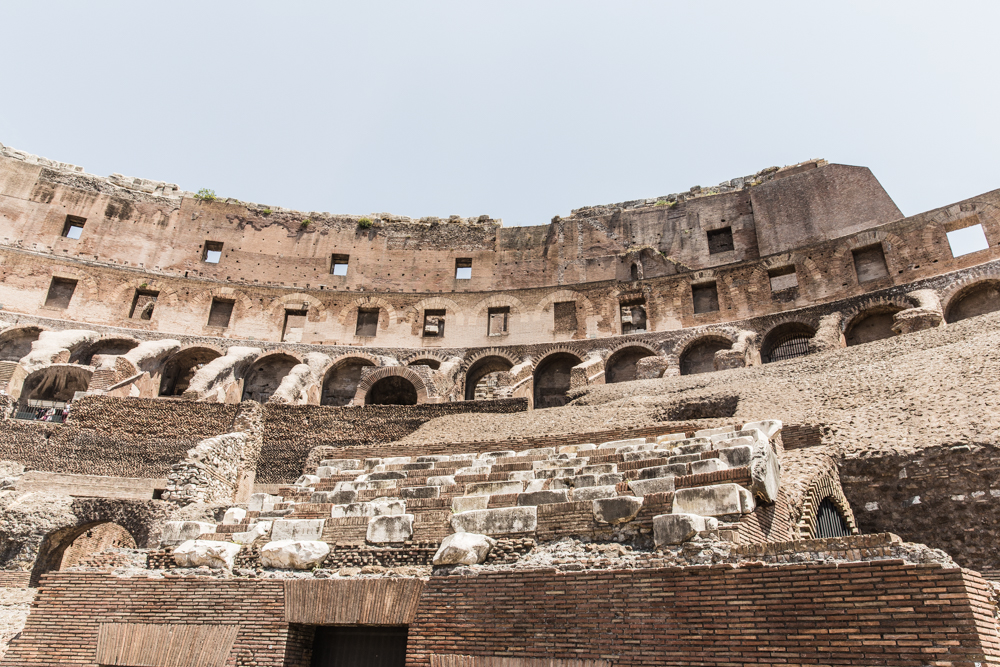 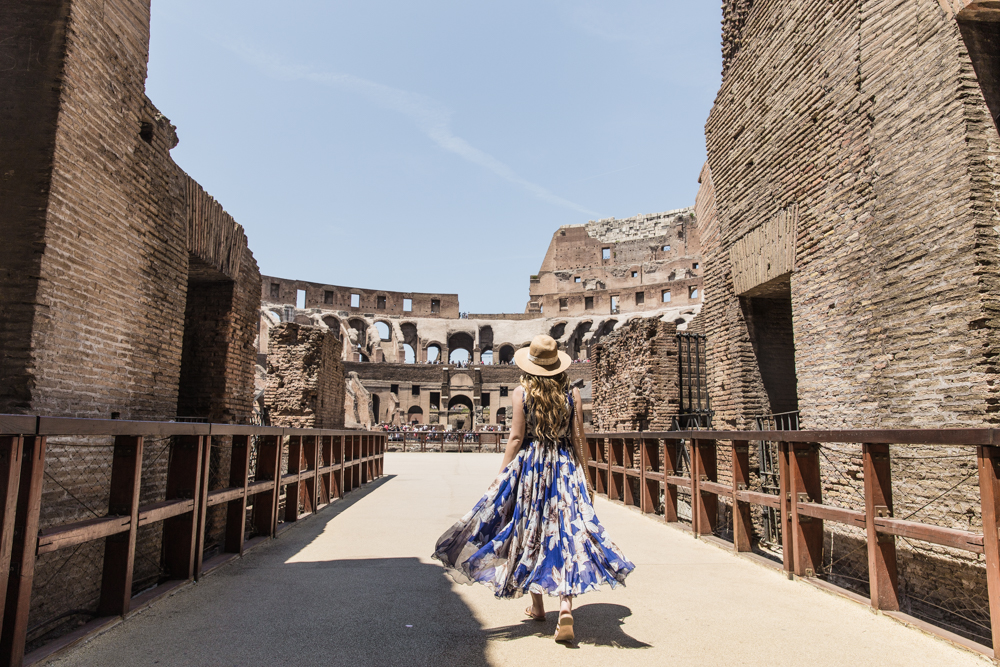 After learning a lot about the Colosseum that I won’t bore you with we strolled through the Roman Forum, which is included in your general admission ticket to the Colosseum, which again buy ahead a time online! Notice a trend here? We went pretty quickly though the Forum just because it was so hot and there is no shade, but still worth the mini heat stroke ;) 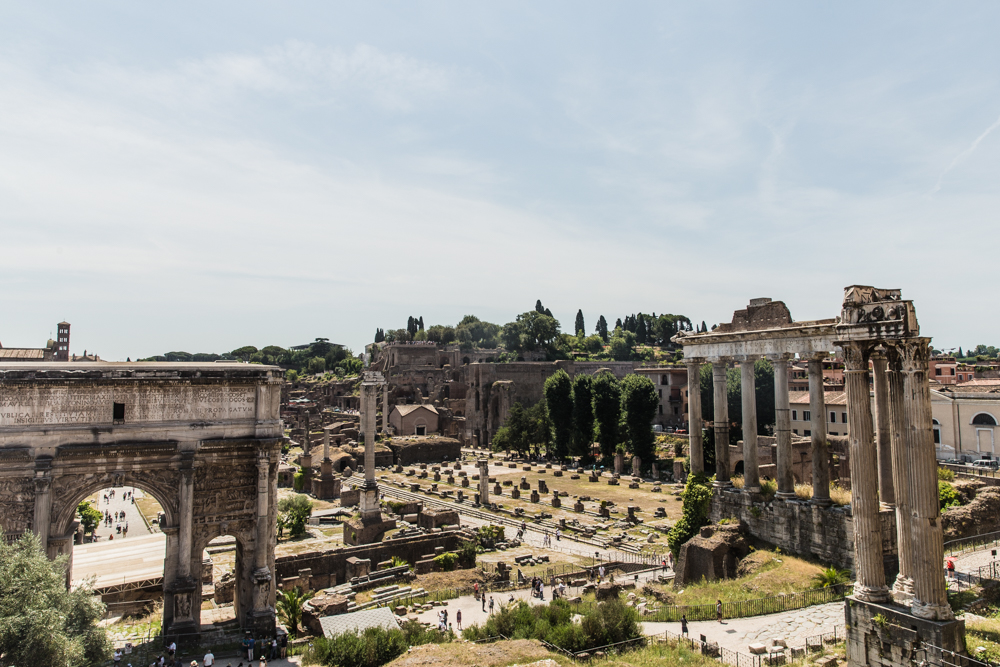 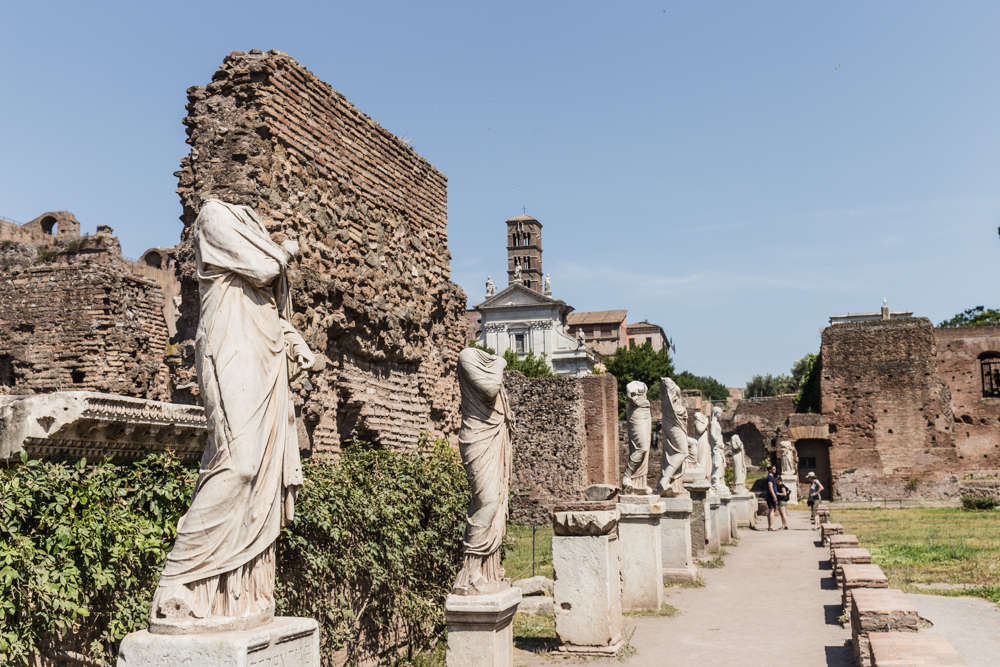 After the Forum we grabbed some lunch and found a really cool craft beer place called Open Baladin for some brews and to cool down. On the way back we headed over to explore the Trevi Fountain and then headed home to freshen up for dinner at Mimi e Coco. I highly recommend this place! It has such a fun vibe, amazing food, and very reasonably priced! 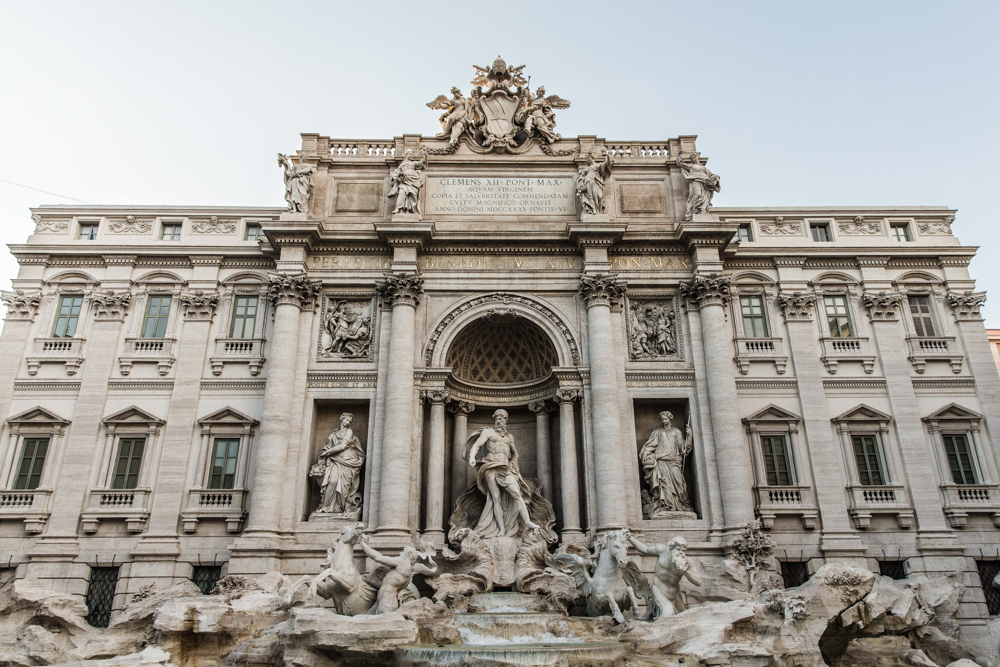 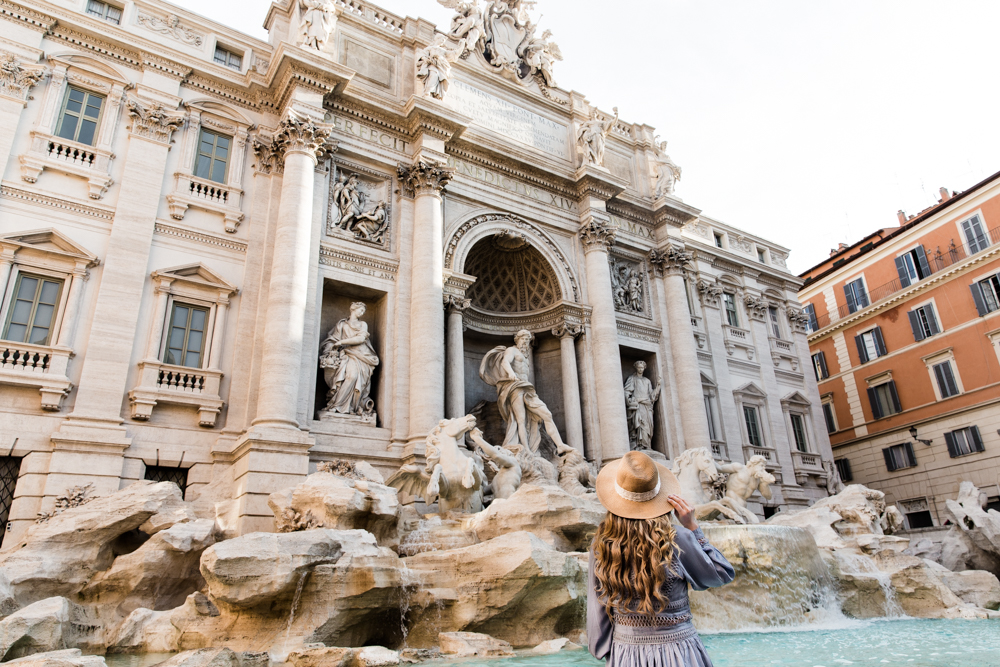 The last day of our trip we just decided to relax since we had to head to the airport in the evening. The did some shopping and grabbed some lunch at a fresh pasta place called Pastifico which came highly recommended by Meagan that definitely didn’t disappoint! We grabbed some last minute spritz and then headed off to the airport to sadly come home! It was definitely a trip of a lifetime and I already can’t wait to go back! Until next time Italy! <3